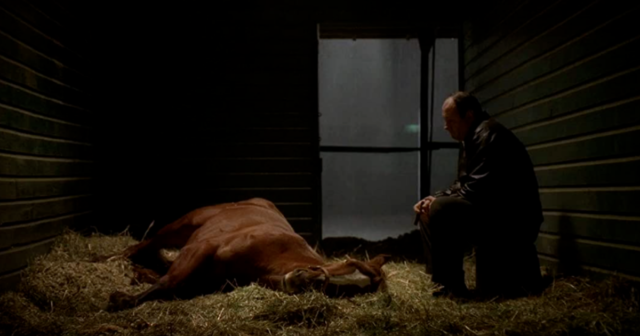 A STAR of iconic TV show The Sopranos has sadly died aged 23 after a long battle with illness.

The mare who played main character Tony’s beloved racehorse Pie-O-My – and became a key part of the plot – passed away earlier this month.

Goldee died after a four-year battle with Cushing’s disease, a hormonal condition caused by changes in the pituitary gland.

The racehorse starred in the 44th episode of the HBO series, which aired in October 2002.

Owned by villian Ralphie Cifaretto, the horse wins a race and Ralphie shares the winnings with Tony, played by the late James Gandolfini.

When Tony suggests the tactics for the next race and the horse wins again, he demands a bigger cut of the cash, sparking fury in Ralphie.

Eventually the horse falls ill in the show and with Ralphie unwilling to pay the vet fees, Tony rushes down to the yard and takes care of it.

The episode features a rare tender moment for mob boss Tony, who sits with the horse, strokes her neck and tells her everything is going to be OK.

A post from the Twitter account of those who looked after the horse in later life read: “Pie-O-My (Goldee) passed away this morning after a four-year struggle with Equine Cushing’s disease.

“ECD is a chronic progressive disease of the intermediate pituitary gland of older horses.

“Goldee was 23 years old and leaves behind her favorite pony companion Candy, who is 33.”

Goldee had been enjoying her retirement in Hudson Valley, New York, where much of The Sopranos was shot in Silvercup Studios.

Gandolfini’s connection with the horse was not just for the cameras.

Goldee’s owner told Mel Megazine how the late actor showed the horse plenty of affection when they weren’t rolling.

She said: “James Gandolfini was really polite, and he wasn’t afraid of [Goldee] at all. He even played with her on set.”

Pie-O-My’s death in the show, while showing a softer side to Tony, ultimately leads to his inner brute manifesting again owing to his feud with Ralphie.

Goldee’s death on February 5 came just a few days after the passing of the horse who played Seabiscuit in the Oscar-nominated film of the same age.

Pie O my (Goldee)
Past away this morning after a 4 yr struggle with Equine Cushing's disease. (ECD) is a chronic progressive disease of the intermediate pituitary gland of older horses.
Goldee was 23 yrs old Goldee leaves behind hefavorite pony candy who is 33 yrs old pic.twitter.com/GF9Tnu7F4e

In this article:maincharacter, themare, tvshow