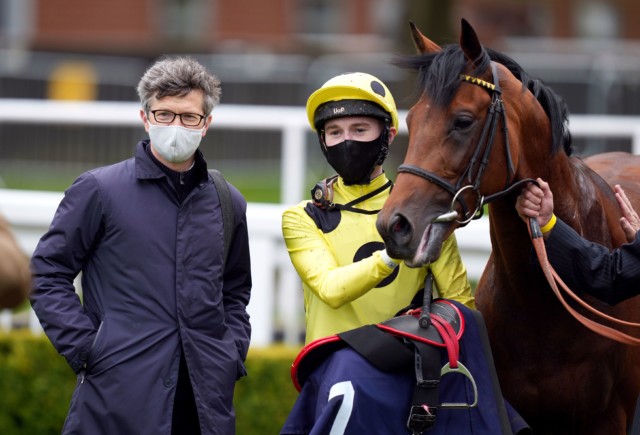 THIRD REALM was the latest springer to emerge in a murky Derby picture.

Roger Varian’s three-year-old was a neat winner of the Lingfield Trial to throw his hat well into the ring for the Epsom showpiece.

Sent off the outsider of seven at 14-1, he was given a confident ride by David Egan who made a race winning move on the turn in.

He picked up well on rain-softened ground to see off 6-5 favourite Adayar by a cosy length-and-a-quarter.

Varian said: “We came here only expecting him to run well, you never quite know when they come out of a novice.

These silks have been worn on some very nice horses this week… how impressed were you?

“But we do like him, he’s been working well the last fortnight and we’re delighted to see him win as well as he did.

“He’s won a recognised Derby trial and is a neat horse, very well-balanced and athletic and as he handled the track well here, so I can see him at Epsom.

“He ticks a lot of the boxes, whether he’s good enough or not, you don’t know until you try!

“He’s thrown his hat in the ring. He’s won well enough to deserve his place at Epsom.”

The open feel to the Derby should become narrower tomorrow with Mac Swiney and Bolshoi Ballet clashing in the Derrinstown at Leopardstown.

Current narrow antepost favourite High Definition is likely to strut his stuff in Thursday’s Dante Stakes at York, another key trial and the last chance to play a hand.

The Oaks trial at Lingfield followed a similar pattern as rank outsider Sherbet Lemon struck at 28-1 for Archie Watson.

Available at 100-1 for the Oaks beforehand, most bookies now go 33-1 off the back of her win from Save A Forest.

Did you miss our previous article…
https://www.sportingexcitement.com/horse-racing/rich-ricci-trio-faugheen-the-machine-douvan-and-benie-des-dieux-retired-by-willie-mullins