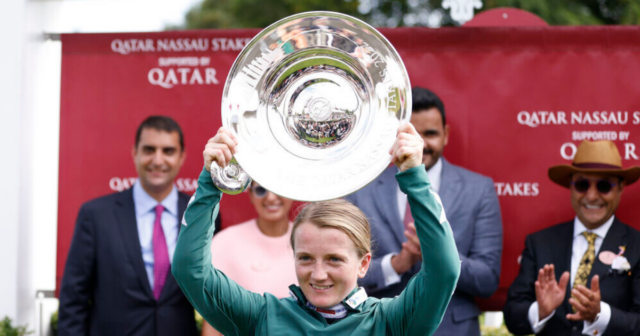 HOW good would it be if Nashwa took on Baaeed in the Juddmonte International?

The unbeaten superstar’s next outing in the £1m Juddmonte International next Wednesday looks like being a damp squib, with no Desert Crown in the mix.

Mishriff and Native Trail look the only viable opposition, so why not throw Nashwa, who would get lumps of weight, in and give us fans a real Group 1 to get excited about.

Word is Nashwa’s Kuwaiti owner Imad Al Sagar is open to having a crack at nine from nine Baaeed. However, trainer John Gosden apparently isn’t quite so keen.

I put it to Lord Grimthorpe, racing manager to Al Sagar and, coincidentally, on the board at York, home to the Juddmonte.

He said: “She’s still in the race. There have been a couple of injuries to some horses but there’s still the matter of Baaeed.

“I think next year will be the time to take on the colts. The Prix de l’Opera looks the best race for her and then there’s the Breeders’ Cup. Those races are the plan.”

The chances look slim of a real Knavesmire dust-up to get punters’ juices flowing. Once the best used to take on the best and those clashes put bums on seats.

Aside from Palace Pier, Baaeed has never beaten a true Group 1 performer.

Even his trainer William Haggas has called for the urgent culling of 300 fixtures from the calendar.

Haggas is taking a risk by sending his star over an extra two furlongs at York. It would be nice if a few others took a chance.

SPEED machine The Platinum Queen will throw her hat into Nunthorpe contention.

The flying filly romped home in a valuable conditions race at Glorious Goodwood and her trainer Richard Fahey (right) is happy to take on the older horses next.

And with runaway Phoenix Stakes winner Little Big Bear set to swerve the race, who could blame Fahey for wanting a crack?

The Yorkshire shirebased trainer has always had a glint in his eye when talking about this horse and was kicking himself for not running her in the Group 3 Molecomb at Goodwood instead.

Fahey is famous for his gallops at his Musley Bank stables and The Platinum Queen regularly outguns the rest of his juveniles.

She broke the two-year-old course record at Goodwood and Fahey would love to win the Nunthorpe for the first time at one of his local tracks.

MALJOOM is booked in for Sunday’s Jacques Le Marois where he could clash with Inspiral.

The three-year-old somehow failed to get up in the St James’s Palace at Royal Ascot with Cieren Fallon Jr never able to get clean air.

Tom Marqand, number one to trainer William Haggas, will get the ride instead at Deauville and connections are confident he’s the one to beat.

Nothing gets close to Baaeed in the homework department but Haggas is certain this horse could be his next big thing.