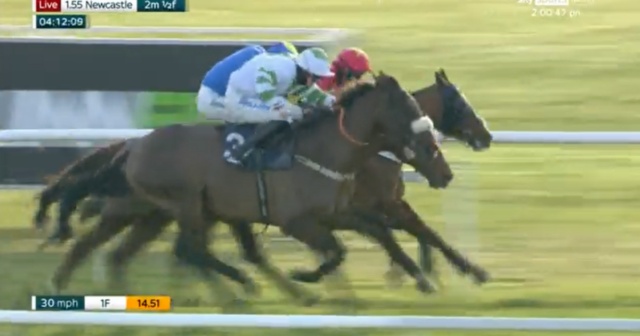 THIS is the absolutely thrilling three-way photo punters are already labelling the ‘finish of the year’.

Donald McCain racked up his 100th winner of the season thanks to 12-1 Cenotice in the 1.55 at Newcastle on Tuesday.

Passing the post it looked absolutely impossible to split the trio after more than two miles of running and jumping.

The gap between them came down to just a short head, with a photo finish only just splitting them after they pulled clear of the rest of the field.

Jockeys Theo Gillard, Thomas Willmott and James Bowen were all flat out on their mounts as the post approached.

Commentator Darren Owen delivered a great race call too as he belted out ‘three heads at the line!’

But it was Cenotice for top trainer McCain who prevailed by just a nose from the Sue Smith-trained 11-1 chance Treshnish.

Samuel Drinkwater’s 13-8 favourite Gallic Geordie finished a further nose behind in the agonising finale for the losers.

Punters were floored by what they had witnessed, with one saying: “That is by far the best finish I will see this year. Wow!”

While another punter who couldn’t tell them apart at the finish said: “The one that won looked like it came third.”

Cenotice was McCain’s only runner on the card and the delighted trainer said after the race: “I think it’s our fastest 100.

“I remember the year we had our most winners (153 in 2011-12) we did it with a four-timer at the Haydock meeting this coming Saturday.

“We’d had a good few seconds in the last few days and I was sort of resigned to the fact it wasn’t going to happen, but we took this horse to Newcastle and knew he had a chance.

“I thought we might have been beaten on the line, to be honest.

“I was thinking ‘we’ve come so close, but what a great finish to be involved in’.

“And then they showed the slow motion and I thought it was a possibility that we’d held on and thankfully we had, which is great.”

This latest finish comes less than a month after a blanket finale involving eight runners at Wolverhampton.

The three runners could hardly be separated at the post

In this article:Haydock, Newcastle, Wolverhampton