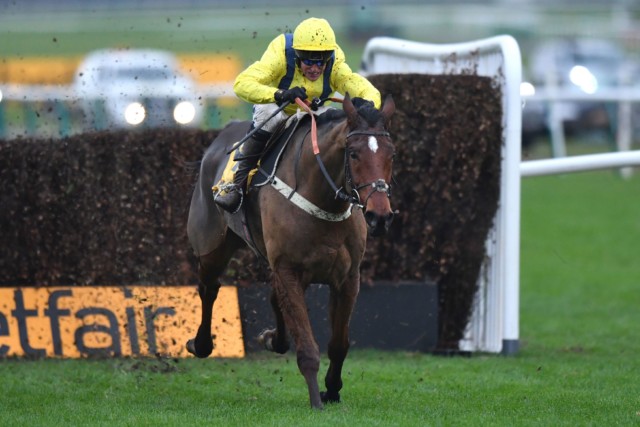 THE Tizzard stable will be hoping for a change of fortune with their big guns in 2021 after a disappointing Festive period.

Lostintranslation’s up-and-down career continued with a King George flop while The Big Breakaway fluffed his lines in the Kauto Star.

Lostintranslation burst a blood vessel in the King George

Gold Cup third Lostintranslation was pulled up for the second year in a row in the King George, after which he was found to have burst a blood vessel.

Joe Tizzard, assistant trainer to his dad Colin, reckons the horse’s hit-and-miss form over the past year could be down to an underlying issue.

He said: “Lostintranslation burst a blood vessel in the King George, which was reported.

“There is normally something underlying when they break a blood vessel, because it puts them under pressure.”

The eight-year-old, who remains a 25-1 shot with Paddy Power for the Cheltenham Gold Cup, will now be freshened up and aimed at the Denman Chase at Newbury in February.

Tizzard continued: “He will have his flu jab now and we will try and get him right for the Denman Chase.

“We want to get another spin into him, and he loves it around Newbury, and the ground at that time of year is usually decent.

“Plenty of horses have bled and then go and run well afterwards. He has never done that at home or anything. But horses bleed from time to time, and we have just got to get him back.

“He hasn’t performed the last twice and he needs to bounce back, but it’s certainly possible that he can.”

The plan for the yard’s The Big Breakaway, meanwhile, is to work back from what was known as the RSA at the Festival.

The five-year-old finished second to Shan Blue at Kempton on Boxing Day, when he was let down by some scrappy jumping in the home straight.

Tizzard said: “The Big Breakaway had his flu jab yesterday, and I definitely think he will be going for what was the RSA.

“I think it was hell of a performance at Kempton, and I think he will have learnt more from that run than he would have learnt in his whole life.

“Shan Blue was very impressive over that track and trip, but I think Cheltenham will suit us better. He has come out of Kempton well. “

“We will probably look to give him another run before Cheltenham. He won’t run until the end of January or early February.”

Advertisement. Scroll to continue reading.
In this article:Cheltenham, Newbury