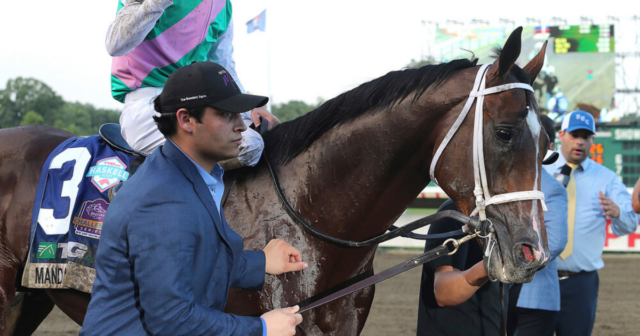 TOP horse Mandaloun could soon be named the winner of two races worth a combined £1.8million – despite finishing second in both.

The three-year-old superstar has already been promoted to first in one race, scooping £438,000.

Mandaloun could end up winning two races worth £1.8m – despite actually finishing second in both

And he could be named the winner of the Kentucky Derby if Medina Spirit is stripped of the win.

The Bob Baffert-trained horse failed a post-race drugs test shortly after victory in America’s most famous race last May.

Baffert recently had his ban on saddling runners in New York overturned with immediate effect.

But Medina Spirit’s £1.4m Kentucky Derby triumph remains in jeopardy after the horse’s failed drugs test was confirmed with a second sample.

A decision on whether to disqualify Medina Spirit – Baffert’s record seventh winner of the Derby – will be made after a Kentucky Horse Racing Commission investigation.

Churchill Downs, the track where the Derby is held, previously said they would declare Mandaloun the winner if a second test proved positive.

But it could be months before the probe is completed.

Speaking after the first positive sample, Baffert, who publicly declared the positive once he learned of it, said: “There are problems in racing, but it’s not Bob Baffert.

“I don’t believe in conspiracy theories, but why is it happening to me?”

Mandaloun, who is owned by Juddmonte, came second in the Derby by half a length, winning £437,956 for connections.

That runner-up could yet be promoted to first and a prize of £1.4m.

Mandaloun was the beneficiary of Hot Rod Charlie’s disqualification in a race at Monmouth Park last weekend.

Hot Rod Charlie, who was third in the Kentucky Derby, was first past the post in the 1m1f race but stewards threw out the result.

The decision came after it was ruled Hot Rod Charlie caused interference, leading to Paco Lopez being unseated from his mount Midnight Bourbon.

Lopez – who was punched by a rival during a post-race bust-up earlier this year – rolled on the floor in agony before being seen to by on-course medics.

He said he was kicked in the knee and couldn’t move it for ten minutes, but fortunately escaped serious injury.

Add in the potential extra Kentucky Derby winnings and it could lead to a total of £1.2m in additional winnings for connections.