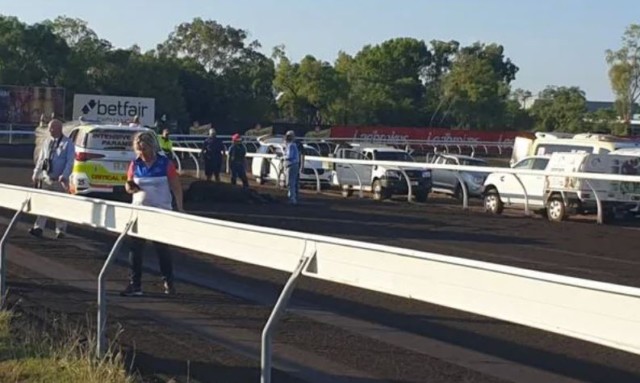 A TOP jockey is fighting for his life after being placed in a coma following a horrific three-horse fall.

Veteran Brendan Sweeney, 51, was among the trio of jockeys to hit the deck at Darwin racecourse in Australia on Saturday.

He was rushed to hospital with a bleed on the brain as well as broken ribs and a punctured lung.

The racing community Down Under has rallied in support of the rider – but all they can do is pray for ‘signs of improvement’.

Racing was abandoned following the fall, which saw all three jockeys rushed to nearby Royal Darwin hospital.

Jarrod Todd and Kim Gladwin, the other riders involved in the pile-up, are ‘doing well’ but nursing bruising and concussions.

Fears remain over the condition of Sweeney, who had emergency surgery when seen to by doctors.

A statement from the Australian Jockeys Association read: “Brendan’s condition is stable but he remains in an induced coma.

“Hoping for signs of improvement in the next 48 hours.

“Jarrod Todd and Kim Gladwin are both doing well.”

Update on Brendan Sweeney. Brendan’s condition is stable but remains in an induced coma. Hoping for signs of improvement in the next 48 hours.
Jarrod Todd and Kim Gladwin are both doing well.

Thoroughbred Racing Northern Territory boss Andrew O’Toole said: “Brendan Sweeney is stable, he is the worst hurt and in an induced coma but he is stable.

“The next 48 hours will be pretty important to his recovery.

“The other two boys, Jarrod Todd has bruising and lacerations to a hand which may require surgery and Kim has a fractured shoulder, rib and punctured lung.

“Those two boys are going to mend and hopefully it is the same for Brendan but we will give him time in an induced coma.”

Commenting on what caused the fall, he added: “The stewards will go through the incident.

“On first viewing and at face value it looked like one of those racing incidents and didn‘t appear to be anything other than that, but that will come out in the stewards’ report.”

The carnage happened after Gladwin’s mount Ogrim went amiss on the final bend, bringing down Todd on Ranceski and Sweeney on The Unknown.

Jockey Melanie Tyndall died after falling from a horse in almost the same part of the track in 2019.

And in 2013 Simone Montgomerie was killed during the Cup Carnival.

Did you miss our previous article…
https://www.sportingexcitement.com/horse-racing/four-big-chances-for-coral-eclipse-pull-out-leaving-just-seven-confirmed-runners-including-10m-wonderhorse-mishriff