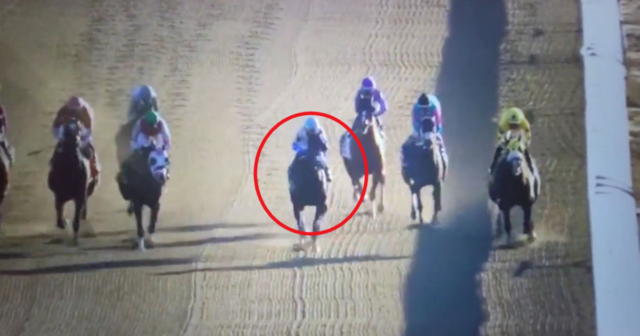 TOP jockey Irad Ortiz Jr was slapped with a rare 30-day ban after what punters labelled the ‘most dangerous’ mid-race move ever.

The leading US rider, who has won more than £22million on the track this year alone, drew widespread criticism for his tactics on Gran Casique.

Ortiz Jr was trying to move to the inside running rail to get the best spot in the race
But he kept moving over and crashed into his young novice rival, forcing them to fall spectacularly from their mount 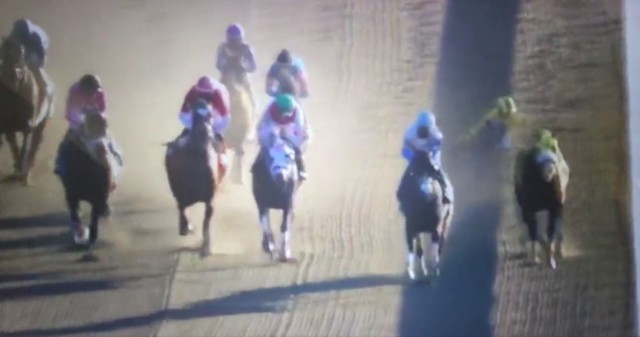 Incredibly, the carnage happened not at the end of the race with everyone flat out trying to win, but early on as riders jostled for position.

Ortiz Jr flew out of the stalls on 15-8 favourite Gran Casique last Friday.

But on his inside and in prime position hugging the rail was apprentice jockey Omar Hernandez Moreno on 7-1 Ragtime Blues.

Ortiz Jr’s wicked move was tough to spot at first glance, as the cameras following the horses were positioned to the side of the track.

Initially it looked like Moreno, a 7lb claimer, was sent flying from his horse when the colt lost his footing.

But the head-on footage was damning for Ortiz Jr, as it clearly showed him moving right across the track with ‘reckless abandon’ and banging into his rival.

The young novice jockey crashed into the rail as a result of the collision and was sent hurtling across the track.

Ortiz Jr carried on and came second in the race – until stewards disqualified him and placed him last.

Jockeys normally get a five or seven-day ban after being found guilty of careless riding.

But Ortiz Jr’s actions were so egregious that he was given a rare 30-day suspension.

Punters were absolutely up in the arms over the actions of the jockey – who earlier this year was banned for punching a rival three times in a post-race meltdown.

Another commented: “One of the most dangerous acts I’ve ever seen in horse racing.”

A fellow racing fan wrote: “Honestly WTF, this is unreal!”

One comment read: “I had to watch this five times….. I still can’t f***ing believe my eyes.”

A fellow Twitter user posted: “Doesn’t get much worse than this.”

While another wrote: “That’s atrociously bad and dangerous riding.”

One New York Racing Association boss said on Twitter: “Aggressive riding is one thing but constantly riding on the edge, and sometimes crossing it, is another.

“Irad Ortiz is a great rider but he needs to reflect on his tactics going forward.”

It was a minor miracle that Moreno and his mount escaped the incident without injury.

Ortiz Jr, who survived two further stewards’ enquiries after victories at Aqueduct racecourse in New York, US, does not plan to appeal his ban.

It is believed the last time a jockey in the US got a 30-day ban was in 2019 when Paco Lopez was collared by chiefs for his role in a two-horse accident that left two riders injured at Gulfstream Park.

Ortiz Jr knows what it is like to be the victim of a nasty fall.

He was trampled on and kicked in the head by a horse ridden by his brother Jose last June.

Ortiz Jr needed stitches in his head and arm after the incident, which also forced him to miss out on around £1.1million in winnings as a result of being taken off booked rides. 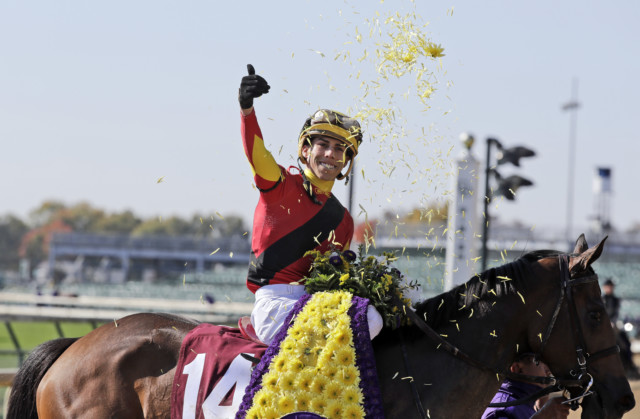