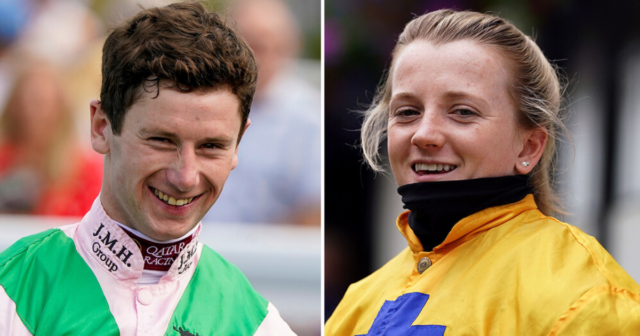 I’M starting to think we should file a missing persons report.

The inaugural Racing League has been running for three weeks now, and a trio of high-profile jockeys are nowhere to be seen.

Murphy and Doyle are yet to ride at the Racing League

If you have any news on the whereabouts of Oisin Murphy, Hollie Doyle or Jim Crowley, do get in touch…

The Racing League has divided opinion – though that isn’t saying much as there are few sports as uncomfortable with change as British horse racing.

But there was never any doubt that there would be near unanimous support for the idea among professional jockeys.

The majority of those in the weighing room spend the bulk of their careers riding at run-of-the-mill meetings and competing for absolute peanuts.

When a new concept comes along with £1.8 million in prize-money and the added spice of a team format, it was alway going to be popular.

So it’s curious that three of our best jockeys are yet to make an appearance.

Even Frankie Dettori, who these days only dusts off the riding gear for showcase meetings, has done his bit, riding at Doncaster 10 days ago.

Appealing to a new audience and trying to promote the sport is of vital importance right now.

Racing’s standing in wider society has never been on more shaky ground.

Whether it’s the disgraceful Gordon Elliott saga, incredible claims of widespread doping from Jim Bolger or the distressing images of thoroughbreds being killed in an abattoir – racing has taken a battering this year.

If the Racing League can bring a bit of fun to our screens and capture the imagination of sports fans who had no real interest in this great game beforehand, we should give it a chance.

Fair enough, you can excuse any of the 36 riders involved in the Racing League who missed the opening fixture, given that it clashed with Glorious Goodwood.

But Murphy missed round two after choosing to ride at Brighton, where the average prize-money was £7,800 a race.

Doyle went to Yarmouth for a handful of rides while Crowley opted to ride three at Sandown instead.

It was the same story this week when Murphy and Crowley went to Salisbury, the latter for just one ride, and Doyle opted for Ffos Las. Ffos Las!

Come on guys, get involved.

If the reigning champ, a former champ and a future champ can’t be bothered to give their backing, why did they sign up in the first place?

You undeniably want racing’s biggest stars to grace the Racing League – these are the jockeys who have the ability to transcend the sport.

But if they don’t want to do their bit then their places in Team ThoroughBid, Team BullionVault and Team Talksport could have been taken by a jockey who isn’t as fortunate as them.

Whatever your stance on the Racing League, it’s introduction has freshened up a Flat calendar which can sometimes feel stale.

It’s a crying shame that some of the top riding talent appear disinterested – maybe if Covid restrictions that limit jocks to one meeting per day weren’t still in place things would be different.

Let’s hope they play a part in the Racing League going forward, because Murphy and Doyle in particular are the stars of the future. We are counting on them.

POOR jockey Sean Levey will have to watch York’s Ebor Festival from the sofa.

He failed this week to overturn a six-day ban for improper riding at Glorious Goodwood – one which seemed very harsh at the time.

His horse interfered with Hollie Doyle’s, and she gave evidence at the hearing in support of her colleague.

But the stubborn disciplinary panel dismissed his appeal – and even had a pop at Doyle for trying to defend Levey.

It’s not the first time a panel has been heavy-handed this year – Jason Watson and the Nottingham ‘non-trier’ debacle springs to mind.

Sometimes you can’t help but shake your head.

IF you aren’t already a fan of young jock Mollie Phillips, then I suggest you familiarise yourself with her pretty quickly.

She is the definition of a pocket rocket and has been making a name for herself up and down the country.

She has come from humble beginnings in Wales and is now one of the most promising apprentices around – her strike-rate is well over 20% this summer.

Speaking at Salisbury this week, she grinned: “I’m on top of the world right now – I feel like the last few months have been a dream.”

Follow her folks, she is worth every ounce of her 5lbs claim.