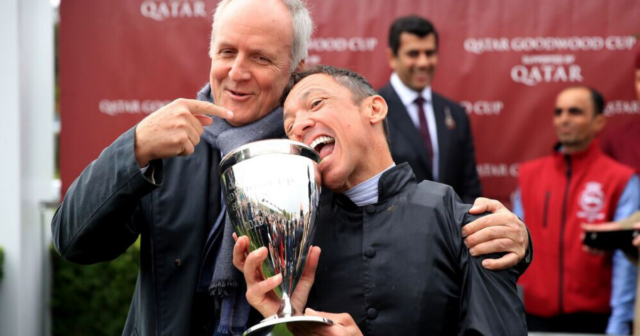 CHAMPION stayer Stradivarius is a Bjorn winner – and expectations are high that he can bag a FIFTH Goodwood Cup.

Owner Bjorn Nielsen made his first fortune trading in precious metals, and more often than not his beloved horse has brought home the gold.

Stradivarius’ domination of the staying division began in 2017 when he beat Big Orange at Glorious Goodwood as a three-year-old.

Four years and £3 million in prize-money later, he is back on the Sussex Downs as he tries to grow his legend yet further.

He suffered a rare setback when hunting a fourth Gold Cup at Royal Ascot – but Nielsen’s confidence in him is absolutely unshakeable.

He said: “Most of the time when you go racing as an owner you hope they run well, and you hope maybe they’ll win.

“But Stradivarius is that rarest of horse and it’s been the case since he won his first Gold Cup that you go there hoping he isn’t going to lose.

“The feeling watching his races is the opposite to what it normally is.

“He’s always the one they have to beat and they ride to beat him, so a lot of horses will be trying to make sure he doesn’t have a good run round.

“They are going to try to make it difficult for him. But if he’s out and in the clear he’s going to win.”

They certainly made it difficult for Stradivarius in last month’s Gold Cup, when he could only finish a distant fourth.

Frankie Dettori was trying to creep into contention when he was stopped in his tracks on the home bend behind runaway winner Subjectivist.

That horse has sadly suffered a career-threatening injury, and Nielsen would have loved the opportunity to prove that his seven-year-old is still top dog.

He added: “When we beat Big Orange four years ago it was a changing of the guard. But I don’t think that was the case at Ascot.

“Stradivarius had worked very well going into the Gold Cup and we were pretty confident he was going to run a huge race, but things just didn’t work out.

“No disrespect to Subjectivist, who was well-trained, well-ridden and quickened up exactly as we were getting stopped in our tracks.

“I was really looking forward to the rematch but we’ll never know now what might have happened.

“I do know Subjectivist wouldn’t have been that far ahead of us again turning in if he were here, I’m sure of that.

“There are still some very good horses there though, and any rain is going to suit Trueshan. “We can’t underestimate Sir Ron Priestley either, who Mark Johnston has supplemented and is no slouch.

Stradivarius could only manage fourth in the Gold Cup at Royal Ascot
Advertisement. Scroll to continue reading.

“You are always going to need some luck in running at Goodwood too – things have to go your way.

“But if he is at his best he will take some stopping.”

He is the red-hot favourite with the bookies for the two-mile Group 1.

And trainer John Gosden reckons the horse is hitting all the right notes at home ahead of the big day.

He is just hoping Dettori can steer clear of trouble this time.

Gosden said: “He’s been in very good order since Royal Ascot. The Gold Cup was a fascinating race and Subjectivist put in a superb performance.

“I’d love to have got in a race with the winner, but we never had the opportunity to get there and that’s life.

“I think Frankie, having ridden him so brilliantly in previous Gold Cups, seemed to have a brainstorm and sit 12 lengths off the pace!

“I’m sorry that Subjectivist is not able to run next week, it’s heartbreaking for everyone involved and it would have been great to have enjoyed a ‘Duel on the Downs’.

“He didn’t have much of a race at Ascot so that race didn’t seem to knock him back too far physically. He’s won four Goodwood Cups in a row which takes some doing.

“It’s going to be a fascinating race with some very nice horses turning up and you’re always going to need some luck in running around Goodwood.

“It will be an exciting day. Stradivarius is still as competitive as ever and one thing will never change about him – his will to win.”

In this article:Ascot, Frankie Dettori, Goodwood