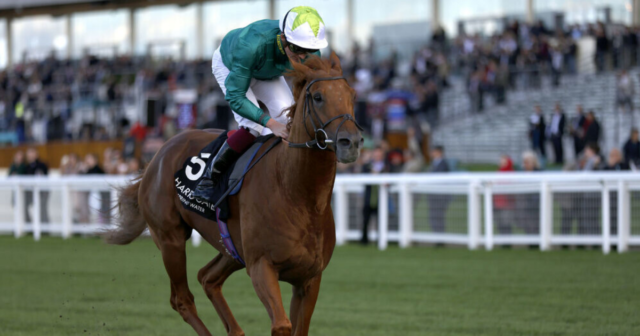 TOP horse trainer Ralph Beckett has been dealt a cruel blow after Scope, one of his stable stars, died following a gallops incident.

The four-year-old Group 1-winning superstar won connections just shy of £200,000 with victory in the Prix Royal-Oak in Paris last October.

But he suffered an injury during training on Wednesday and had to be put down.

Beckett, who is based at Kimpton Down Stables in Hampshire, revealed the sad news on his blog.

He wrote: “Sadly I have some bad news. Scope was put down this morning after fracturing his right hand cannon bone and pastern, whilst at routine exercise.

“Having trained him, his entire family, and won a Group 1 with him last autumn, he meant a great deal to us and we will miss him sorely.”

The news is a crushing blow for Beckett at a time when, arguably, his stable has never been stronger.

Speaking of that triumph at the Curragh, Beckett said: “Saturday was a special day for everyone involved with Westover.

“He was extremely impressive in the Irish Derby, winning by seven lengths.

“Colin Keane was positive on him from the outset, took up the running two furlongs out, and went further and further clear.

“He has come out of it well, and is a possible for The King George VI and Queen Elizabeth II Diamond Stakes at the end of July.”

One said: “Devastating news! Thoughts with all.”

Another commented: “Horrible to hear. Thoughts to his owners, Rob Hornby and all at Ralph Beckett’s yard.”

While another posted: “What a massive shame.”