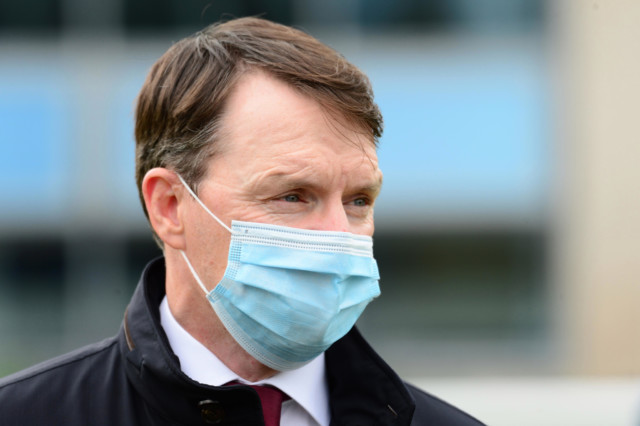 AIDAN O’Brien has apologised for the ’embarrassment’ a mix-up caused that saw two horses run in the wrong colours during last season’s Group 1 Bet365 Mile at Newmarket.

His pair of Snowfall and Mother Earth ran in the wrong silks and number cloths and were partnered by the incorrect riders.

O’Brien could only watch on as the episode unfolded

After a hearing today, the British Horseracing Authority (BHA) handed O’Brien a £4000 fine for what was labelled a ‘genuine mistake.’

Originally punters were told 50-1 shot Snowfall had finished third at 50-1 under James Doyle. But it soon emerged she had in fact finished eighth and that stablemate Mother Earth was third.

Watching on from Ireland due to COVID travel restrictions, O’Brien knew what was about to happen as soon as the stalls opened and the race began.

The Irishman said: “All I can say is, I’m sorry. Things were a bit of a mess due to the pandemic and it was difficult to even have runners in England, so we had to leave a team of people over there.

O’Brien enjoyed another brilliant season last year despite the hiccup

“We had to leave a team of people over there, and it was something that happened that we could never expect, or believe, could happen.

“We are sorry it happened, and we are sorry for the embarrassment it caused.”

O’Brien revealed that he called the BHA straight after the incident to report what had happened.

The powerhouse trainer has also changed his routine with horses that travel across to England to race.

He added: “The changes we have made since then is that our staff now travel with a scanner and every horse will be scanned as they get off the plane.

“Our head lad had it in his head when they got off the plane that one was one, and the other was the other. If he could have scanned them himself, there would have been no mix-up.”

The BHA panel finalised: “This was a mistake, unfortunately in a high-profile and Group 1 race. In the circumstances we feel the fine should be one of £4,000.”