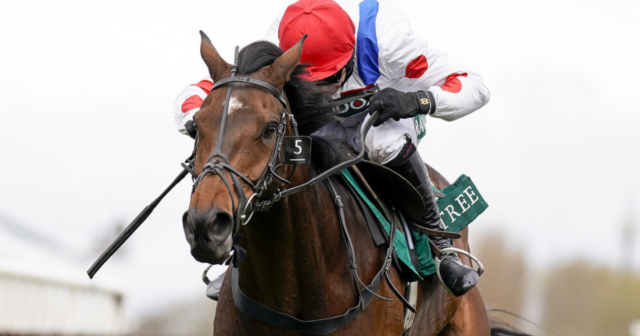 DAN SKELTON isn’t worrying about the strength of the Irish challenge at Cheltenham.

The top trainer will lead the British resistance at next month’s Festival, alongside the likes of Nicky Henderson and Paul Nicholls.

Last season, Irish-trained runners were dominant, winning an incredible 23 of the 28 races at the four-day meeting.

But Skelton has not had his confidence knocked, despite a string of impressive performances from some of Irish jump racing’s big guns in recent weeks.

He will be hopeful of adding to his haul of four Festival winners, with Gold Cup hope Protektorat and Champion Chase runner Nube Negra among his big contenders.

Protektorat, part-owned by Sir Alex Ferguson, is as short as 8-1 with Coral for the Festival showpiece, while Nube Negra, who was a close second to Put The Kettle On in last year’s Champion Chase, is a 10-1 shot with SkyBet.

Skelton said: “I’m very happy with where our horses are, they both head straight to Cheltenham, worked this morning and went nicely.

“They have got hard races coming their way – but that’s what happens in Champion Chases and Gold Cups.

“I’m very happy with our horses and that’s all we can be really.

“Does watching them in Ireland change anything? Not really. I feel it’s a very open Gold Cup.

“Every time a Gold Cup contender has raced in a Gold Cup trial, there’s been a different winner and Conflated chucked his hat into the ring at the weekend.

“I feel it’s a high quality Gold Cup, but quite an open one and I’m delighted to have my horse in the form that’s he in at the moment to go there.”

He said: “Nube Negra was second in the race last year and Chacun Pour Soi has proved to be a significantly better horse on his side of the Irish Sea, so perhaps his run in last year’s Champion Chase (third) isn’t true to what he can really do.

“The two from Ascot, we’ve never faced them before and on numbers they are obviously achieving very highly.

“We know it’s not going to be easy, but the best we can do is have them in the best shape we can and go give it a crack.”

Another of Skelton’s stable stars will complete his prep for the Festival at Warwick this weekend.

Third Time Lucki, a general 6-1 shot for the Arkle, will clash with his Henry VIII Novices’ Chase conqueror Edwardstone in the Kingmaker Novices’ Chase on Saturday.

Skelton said: “I was happy with Third Time Lucki this morning after just giving him a little breeze and everything was good.

“The reason we’re going to Warwick is because the ground is hanging on. If there was nothing but rain forecast I wouldn’t have even entered him, but he’s in nice form and I think the track will suit him.

“Obviously Edwardstone is turning up which will be a harder task, but I like the idea of being there on good ground. Knowing what we know now, I think we’re entitled to think we’ve got a better chance of beating Edwardstone because of the ground.

“I think if we met him on Sandown ground we wouldn’t actually meet because I’d protect my horse from that, so we’re meeting on what should be nice ground and it gives us reasons for optimism.

“With the ground in our favour I think we can turn the tables.”