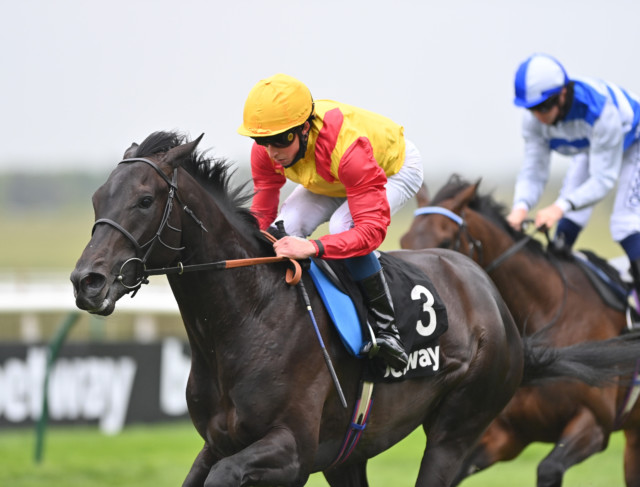 TRAINER Ed Dunlop is on the hunt for a jockey for Derby hopeful John Leeper.

The horse is named after his late father and only 7-1 for the Epsom showpiece on June 5.

He threw his hat into the Derby ring with a taking win in Saturday’s Listed Fairway Stakes at Newmarket under Will Buick.

And as the son of Dunlop’s Oaks winner Snow Fairy, the excitement is building around John Leeper’s Classic chances.

But with Buick needed by Godolphin, Dunlop hopes to have a super-sub booked in as soon as possible.

The Newmarket handler said: “There was always going to be a lot of pressure on a horse named after my father and bred the way he is.

“The horse doesn’t know anything about it, but for us it was always going to be nerve wracking.

“It was owner Mrs Patino’s idea, I had nothing to do with it, but thankfully it’s going okay so far.

“The Newmarket race wasn’t much of a trial as they crawled much of the way before sprinting the last three furlongs.

“Given his pedigree we know he’s a horse who’s going to improve with age and that’s why we only saw him once at two.

“But the owner has always been very keen to run him in the Derby if he was good enough and he’ll line up there all being well.

“We’ve only managed a couple of fifths at Epsom before so it would be lovely if he can improve on that.”

Bolshoi Ballet heads the betting at 7-4 with Aidan O’Brien stablemate High Definition next in at 7-2.

With Ryan Moore likely to partner the favourite, Dunlop had enquired about the availability of Frankie Dettori.

The exciting John Leeper lands Listed success on just his his career start for @EdDunlopRacing at @NewmarketRace pic.twitter.com/0mCYpBms5z

But the Italian looks set to partner one of the Ballydoyle battalion sent over from Ireland.

Dunlop explained: “Frankie has ridden for us a lot over the years but he’s going to be riding one of the many O’Brien horses that come over.

“Hollie has obviously ridden the horse once, but we need to get something sorted, hopefully by the weekend.

“Mrs Patino has been away the last few days and she’d like to have a big say in the matter so we hope to get that dilemma out the way soon.

“There’s definitely a buzz about the yard at the moment. The Grand National, the Derby, they all have these big build-ups and it’s great to be a part of. We haven’t had a big horse for a few years.

“There are a few roads to get down yet, but all of them hopefully lead to Epsom.”

Did you miss our previous article…
https://www.sportingexcitement.com/horse-racing/meet-marco-reus-wife-scarlett-whos-set-to-steal-the-limelight-from-dortmund-star-hubby-in-goodwoods-magnolia-cup