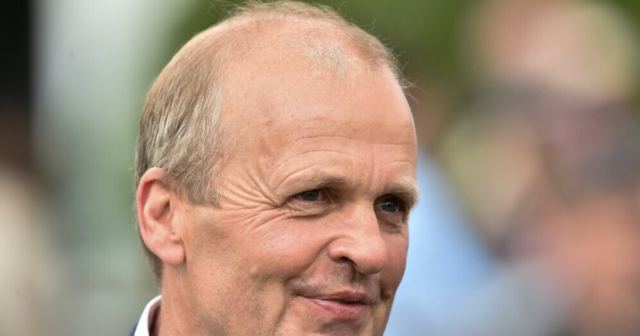 A ‘RECKLESS’ racehorse trainer has been fined £23,000 for a serious rules breach.

A search of Kieran Cotter’s yard sparked ‘grave concerns’ for inspectors, who found ‘needles and syringes lying around’.

Top trainer Cotter has been fined £23,000 for a ‘serious’ rules breach regarding one of his runners

Successful Flat trainer Cotter, based in Ireland, has been hit with the fine after one of his winning horses failed two post-race tests.

Slade Runner was found with ‘abnormally high’ levels of cobalt – a substance prohibited on racedays – after victory at Dundalk in January 2021.

The horse was disqualified after an initial urine sample analysis and B sample returned levels above the legal threshold.

Trainers cannot give cobalt to a horse in the two days before a race.

Giving evidence to the Irish Horseracing Regulatory Board, Cotter claimed he administered 20ml of cobalt to the horse on each of the two days before the race.

He claimed the horse, now a five-year-old gelding, had a copper deficiency.

An unannounced raid of Cotter’s yard the following month found he had failed to keep a medicines register ‘for a number of years’ even though it was ‘clear’ medicines were ‘regularly administered’.

A referral committee judgement said Dr Lynn Hillyer, Chief Veterinary Officer in Irish Racing, found ‘the presence of numerous used needles and syringes lying around in an area accessible by Mr Cotter’s family’ to be of ‘very grave concern’.

Cotter, who has won more than £600,000 over the past five years, was also found to have ‘failed to securely lock the medicines cabinet’ at his yard.

The committee did not find Cotter in breach of rules on possession of illegal substances – but did note his conduct was ‘of a serious nature’.

All in all he was fined just under £17,000 for failing to maintain a medicines register.

A further £4,235 fine was dished out for breaching Rule 148(i) regarding welfare of his horses.

Slade Runner’s disqualification also stung Cotter to the tune of £2,000, while costs of £6,500 were awarded to the IHRB.

Did you miss our previous article…
https://www.sportingexcitement.com/horse-racing/owner-suffered-heart-attack-celebrating-winner-at-ripon-races/