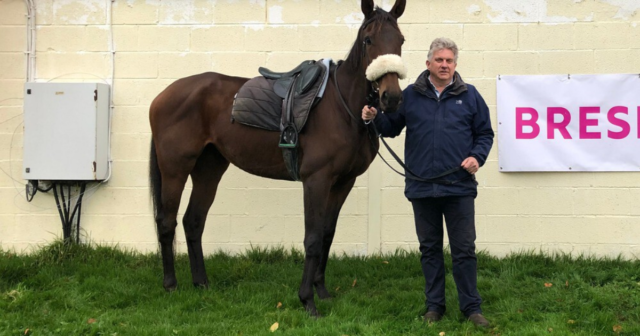 AS the saying goes “where there’s muck, there’s brass”.

And it took a whole lot of sh*t-shovelling and graft for Milton Harris to dig himself out of bankruptcy hell and rebuild his training career.

Now he has a lively contender for the £250,000 Ladbrokes Trophy in Danny Whizzbang, who can continue a remarkable rise in fortunes for west country-based Harris.

Winners at Cheltenham and Aintree this season have put his team back on the map after a torrid spell.

The 62-year-old, who had amassed 172 winners over a ten-year career, declared himself bankrupt in 2011 and had his licence taken away.

He tried and failed on two occasions to be let back into the training ranks.

Only after a seven-year spell in the dark did the BHA finally relent and Harris made the move from the Cotswolds to his new home in Warminster, Wiltshire with just two members of staff and a handful of moderate horses.

He said: “It has been hard work. The staff rode the horses and I mucked out every box on my own.

“It wasn’t easy, I was doing the dirty work every day as we had no choice.

“It was a tricky time, I wouldn’t want to go there again. It was hard for me personally, emotionally and financially.

“You wouldn’t have wished it on your enemy.

“But you try not to let it knock you down. You have to get up and get on with it.

“Did I do some things wrong? Yes. I have no bitterness towards the BHA as they have a thankless task, but sometimes you do question whether it’s something else you’ve done.”

Having spent so long on the sidelines, the comeback was never going to be straightforward. Was Harris always planning to get back in the game?

“Oh God, yes,” he answered before the question was close to being finished.

“I was always going to come back, the only reason I wouldn’t have was if the BHA didn’t let me. I never went away, I stayed in the industry as much as I could. I managed horses for a few people, but it wasn’t rewarding, especially not financially. I was struggling.

“I never left the industry but people do forget about you and it wasn’t easy getting back into the swing of things.”

Already on 28 winners for the campaign, Harris is a shoo-in to beat his previous best of 32 with more than five months of the season to run.

Stable star Knight Salute has already notched a Grade 2 at Cheltenham and his trainer thinks he’s the real deal, with Aintree winner Legionar another youngster he has high praise for.

After what he’s been through, most would be satisfied with a full yard of horses and a growing team, but Harris wants more. He said: “We’ve got 52 stables and we’re full, we have about 60 in with a few in the fields and what not. But it wasn’t always like that, far from it.

“I’m very grateful, I’m a hardy b*****d, but I’m grateful for where we are and that’s only possible because of loyalty and working bloody hard.

“In my last full season before the ban I finished 22nd in the championship, out of about 650 which I would say is in the Premier League — the relegation zone!

“Now we’re back in that position, I’d like to think, but we’ve got to get ourselves in Europe as they say. That’s hard with the horses we have, we don’t pay a lot of money for the ones in but we’re doing our best to get there.

“The phone is ringing a hell of a lot more, that wouldn’t have happened 18 months ago.

“It’s lovely, but you can’t lose sight of the fact you need to train winners — the bubble can quickly burst, as we know.”

Danny Whizzbang was bought cheaply from Paul Nicholls and will make his first start for Harris in the  Newbury feature.

A Grade 2 winner at the track, he’s no lost cause and the Harris horses could not be in better form. The trainer said: “He was 50-1 when the race first came out, now he’s shortened up into about 33-1 and I expect he’ll be about 25-1 before the off.

“I have a feeling he might be the kind of horse to catch fresh. I feel like while the horses are healthy we have to have a shot.

“He’s not a sexy workhorse, but boy he’s fit, his blood count is perfect and we’re going to put a bit of headgear on him.

“Paul is a good friend of mine. You’re  never going to improve one of his massively so we need to try and change something. A change of scenery can sometimes be enough to do the trick.

“To even have a runner in a race like this is something. God forbid he runs a good race!”