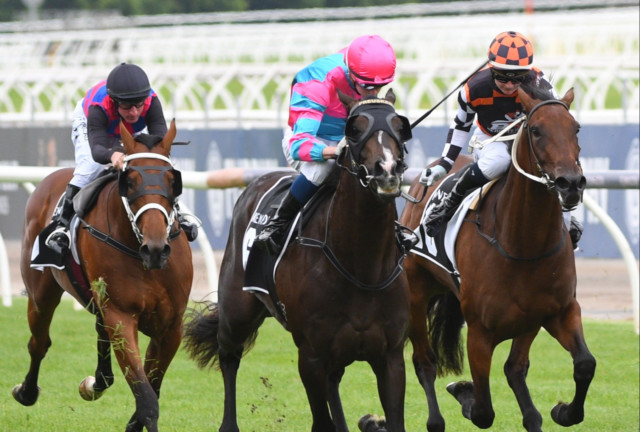 AUSSIE racing fans were left stunned on Saturday as Lunar Fox won the Australian Guineas at odds of 300-1.

The three-year-old became the longest priced winner of a Group 1 race in Australian history – with his connections describing the moment as ‘surreal’.

He broke the long-standing record of Abaridy, who won the Group 1 Caulfield Guineas at odds of 250-1 in 1986.

The Paul Preusker-trained colt went into the Flemington contest as the rank outsider having been beaten over 13 lengths in his prep race.

But he travelled nicely into contention under jockey Michael Dee and stuck his neck out bravely to lead close home, beating 9-1 shot Cheery Tortoni with 5-2 favourite Tagaloa back in third.

Man on the mic Matt Hill said: “Lunar Fox! It’s a complete boil-over in the Guineas!”

And winning rider Dee was as stunned as those watching on in the stands.

He said: “I can’t believe it. It hasn’t sunk in. To be honest, I didn’t give him much hope. No one else really did either.

“It’s obviously a massive thrill and I can’t believe it has just happened.”

Trainer Preusker was watching from home, so it was left to his shell-shocked partner and assistant Holly McKechnie to react to the result on course.

It’s an all-time massive upset in the Australian Guineas!

Lunar Fox wins at enormous odds for Michael Dee and Paul Preusker. What did you make of that, punters?

She said: “It’s a bit surreal at this stage, I can’t believe it!

“He’s always had a lot of ability, this horse. Obviously last start he ran below par and we couldn’t really find any issue.

“We’ve done the old trick with the blinkers and it seems to have done the job.

“Last time was just out of character. He’s always trying this horse.”

Did you miss our previous article…
https://www.sportingexcitement.com/horse-racing/frankie-dettori-excited-to-be-part-of-team-as-darryll-holland-and-kieren-fallon-training-partnership-revealed