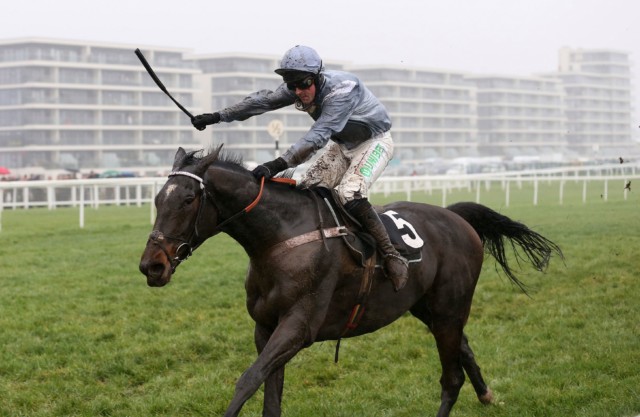 But his trainer Nicky Henderson has warned punters his star might just need the run on his reappearance.

He’s the red-hot favourite for the Grade 2 Many Clouds Chase.

And one-time Gold Cup winner Native River and the Paul Nicholls-trained Frodon are both waiting in the wings at 9-4.

It will also be a big day for stand in jockey Jerry McGrath who fills in for Nico De Boinville who will be at Sandown to partner Altior in the Tingle Creek.

Trainer Henderson warned: “He takes an awful lot of getting ready as he takes a huge amount of work.

“I have a few reservations. I don’t think Aintree is the greatest track for him. He is a big horse who loves to gallop and gallop.

“He loves jumping and you cannot do enough work with him.

Nico has always wanted to school him, but he can’t ride him as he is at Sandown. Jerry McGrath will ride him on Saturday and therefore schooled him.

“It was actually the first time this year that we put the cheekpieces on him at home and they made a big difference – it really does sharpen him up.

“It is a good race with a competitive field. His first run last year was not awe inspiring at Sandown then he won the Cotswold and was second in the Gold Cup.”

Santini is as short as 6-1 for the Gold Cup at Cheltenham in March and it’s there Henderson thinks Santini will be at his best.

He added: “That is a different ball game round Cheltenham compared to three miles at Aintree.

“There is nowhere else for us to go though, he wasn’t ready for Haydock and I don’t think that would have been any better for him anyway.

“This is a good, competitive race as it should be. It will be a very interesting race.”