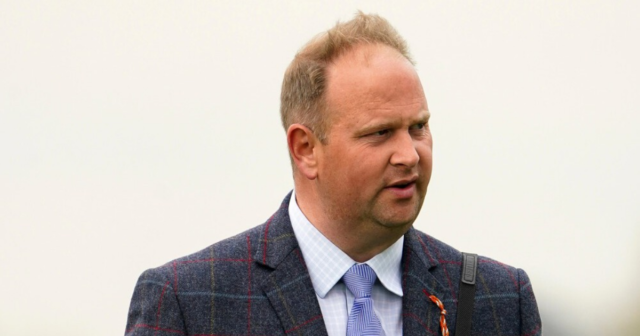 THERE is a French revolution going on in the heart of Sussex.

It’s less guillotine and more gallops, but a revolution all the same.

David Menuisier is hoping to fulfil a Derby dream this year

That’s down to David Menuisier, a trainer many of you wouldn’t have heard of five years ago but whose runners now command respect wherever they go.

The key to his success? He trains his horses like he is preparing a fine French wine.

No, not by stomping on them with his bare feet, but handling them with a delicate touch and a barrel-full of patience. And the results speak for themselves.

From virtually nowhere, he began bagging big races all over the world, in the UK, France, Australia, Germany and even Sweden.

Top-class animals like Danceteria, Thundering Blue and the dual Group 1 winner Wonderful Tonight put his yard on the map.

And now, as he eyes up the Derby with his promising colt Lionel, he has the British training establishment looking over their shoulders.

It makes you wonder why more young French trainers haven’t brought their talents and methods across to England?

“They are probably put off by the food,” Menuisier grins. Good point.

But it’s all a far cry from when he and his wife Kim started out with just four horses in 2014.

None of them had been broken in, one was a backwards two-year-old and two of them were jumps horses, which they hoped to sell to raise some cash.

A few months in, the jumpers were still in the yard and the husband and wife team were down to their “last few hundred quid”.

And their only race-ready horse, Slunovrat, was almost killed when he was brought down in a horrendous incident at Kempton.

Just days after horse and trainer had that lucky escape, a buyer swooped in for the jumps horses to help keep them afloat.

Soon after, Slunovrat got them off the mark at Newcastle.

He said: “Our first winner might have been in a class six on the all-weather, but to us it was like winning the Arc.

“We had been through a lot and were on the verge of packing up and calling it a day.

“It was just me and Kim doing everything and it was tough going, but once the first winner came people started to take notice.

“The seven-hour drive home flew by that night.”

Wonderful Tonight was a dual Group 1 winner for Menuisier

The good days gradually began outweighing the bad ones after that.

Except for the time he accidentally ran over one of his terriers in his car on the gallops!

He joked: “She was absolutely fine thankfully. My dogs come everywhere with me.

“One day I called out for her and couldn’t see her, I started to drive off and next thing I know I hear a yelp. But she got up and walked off like nothing had happened!”

As the quality of horses in his yard increased, so did the size of his dreams.

He has very high hopes for Sir Bob Parker, who runs in a French Derby trial at Saint-Cloud on Sunday.

And Ottilien, or “Wonderful Tonight, mark two” as he calls her, who could yet line up in the Oaks if the ground comes right.

There is only one Derby, though, and the exciting Lionel is the horse who could take Menuisier to the pinnacle of the sport.

The colt was an eye-catching third in a hot maiden at Newbury last month, and he will try to book his ticket to Epsom in the Derby Trial at Lingfield.

His trainer would have preferred softer going at the Surrey track, so he may have to find the horse an alternative route to the Classic if forecast showers don’t arrive.

He said: “He is a lovely, big horse who has a lot of talent. We liked him from an early stage.

“His jockey Jamie Spencer has always loved him and gets on well with him, and the horse has improved a lot physically over the last year.

“He was unlucky not to win at Newbury in April when they went no pace and he was closing all the way to the line.

“He stays the trip strongly and we could do with them going a decent gallop, he wouldn’t want it to be a crawl again.

“Of course everyone dreams of having runners in the Derby. We don’t want to get ahead of ourselves because things can go wrong in this game.

“The Derby is the most famous race in the world, so if we can get this horse to Epsom it will be an amazing day for all of us.

“But we mustn’t lose our patience. One step at a time.”

Advertisement. Scroll to continue reading.
In this article:fiveyears, ofyou, thesame