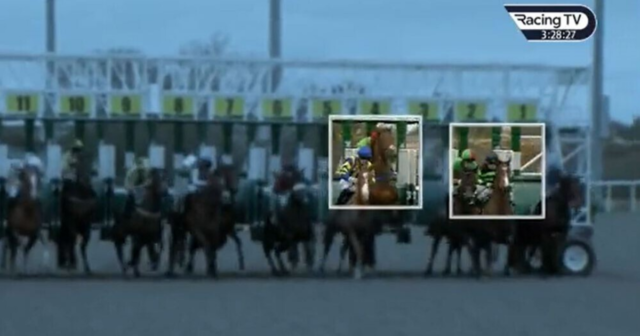 TWO jockeys were banned after a bizarre pre-race mix-up was picked up by punters on social media.

The slightly shambolic scenes unfolded before the 6f Class 4 sprint at 2.15 at Chelmsford on Tuesday.

Punters noticed the jockey in the red cap coming out of stall four was actually in the wrong stall
Catton, in the green silks with the red dot on his back, was meant to be in stall two but jumped out of gate four

At first glance there appeared to be nothing unusual going on as the 12 horses entered the starting stalls.

But if you had money on Sixth Street, ridden by Kieran O’Neill, or Lord Cherry, the mount of Luke Catton, and a racecard to hand, then you would have spotted it.

Basically, 80-1 outsider Lord Cherry was supposed to go in stall two but actually ran out from gate four.

Sixth Street, the Richard Hannon-trained 2-1 joint-favourite, who was meant to be in stall four but went out from stall two.

Lord Cherry fell out of the gates awkwardly and was never on terms, finishing a distant ninth.

One viewer wrote on Twitter: “Anyone else notice that Sixth Street & Lord Cherry were in the wrong stalls in the 2:[email protected]?”

Stewards opened a probe into what happened and decided the reasonable conclusion was to ban both riders for one day.

The official British Horseracing Authority stewards report read: “The Starter reported that Kieran O’Neill, the rider of SIXTH STREET (FR), placed third, and Luke Catton, the rider of LORD CHERRY (IRE), unplaced, had both started from the wrong stall.

“Both riders and the Starter were interviewed and shown recordings of the start.

“Catton and O’Neill were both suspended for one day. Being a 7Ib Claiming Apprentice, Catton was offered the opportunity to be accompanied in the enquiry but declined.”

Williams spoke afterwards and suggested it was harsh Catton had copped a ban.

He said: “Luke was the last one in, so how can it be his fault?

“I don’t want to bash the BHA too much, as they’re having trouble from all sides at the moment, so hopefully they’ll learn from it.

“We’ll just put it down to one of those things and we’ll move forward. Luke’s only just moved to me and he’s only learning as he’s a 7lb claimer.”