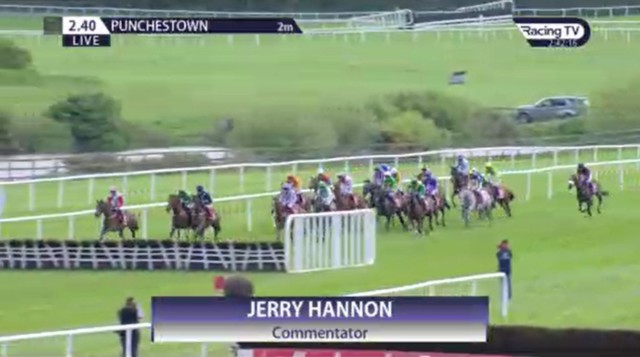 One meeting was abandoned and another saw first-flight carnage with FIVE horses coming down on Sunday.

Jockeys Eoin Mahon and Paddy Kennedy are to remain under observation ‘for the coming days’ after their scary falls, say the Racing Post.

He is believed to have suffered multiple fractures after coming down on Leading Babe at the second fence of the horse’s debut run.

The incident happened at Grennan point-to-point in County Kilkenny, with the remaining four races of the card cancelled.

Meanwhile, Kennedy, the older brother of Gold Cup-winning jockey Jack, was brought down on 100-1 outsider Lady De Vesci during scenes of total carnage at Punchestown.

Five horses were ruled out of the 20-runner race at the first hurdle of the two-mile contest, with Grand National winner Rachael Blackmore among those to fall.

Blackmore was stood down from the rest of her rides but, along with fellow riders Conor McNamara, Kevin Sexton and Ian Power, was believed to be unhurt in the flashpoint.

Indeed, she raced three times on Monday, in a sign that she escaped with a few bumps and bruises but was mostly unhurt.

Blackmore, the leading jockey at Cheltenham Festival, had been aboard 6-4 favourite Mind Your Money when the chaos started.

That runner, along with Sexton’s 100-1 Lucy Van Pelt, Power’s 250-1 Rags Kitten and McNamara’s 15-1 Princesse Cleni, all exited the contest.

“Paddy remains in Naas Hospital and Eoin is in Tallaght. Both are clinically stable and will remain in hospital for further observation and treatment over the coming days.”