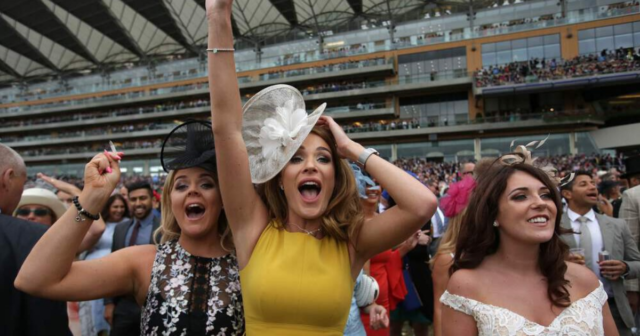 THE raunchiest racecourse in the UK has been revealed – as one in ten admitted to romping at the track.

A survey by freebets.com also found 14 per cent of men had cheated on their partners during a big day out.

Nowhere can beat Royal Ascot for being the raunchiest racing event

But just four per cent of women admitted the same, with those aged 25 to 34 most likely to get it on.

Some 17 per cent of people said they had got a bit sweaty at the start when attending Royal Ascot, the jewel in the crown of the Flat racing season.

The posh meeting, held during the peak summer month of June, is famed for top hats and top fashion.

Another 12 per cent of punters said they had come under starkers orders at Cheltenham Festival in March.

At the Epsom Derby – The Queen’s favourite event – the figure was nine per cent while Newcastle was also popular with seven per cent of the 2,000 people surveyed.

Performing less well was York with five per cent, while Doncaster flopped completely with just three per cent.

Freebets told The Mirror: “Backing a winner and having a couple of drinks is a heady mix. Couples get carried away.”

Punters will be hoping Cheltenham Festival goes off with a bang after being denied entry last year.

Coronavirus restrictions meant the four-day extravaganza – which usually brings in 250,000 racegoers – went behind closed doors in 2021.

But the Guinness is all set to be flowing in two month’s time as bosses said demand for tickets had been sky high.

Did you miss our previous article…
https://www.sportingexcitement.com/horse-racing/trainer-dan-skelton-to-be-charged-by-bha-after-owners-lodge-complaint-over-130000-horse-sale