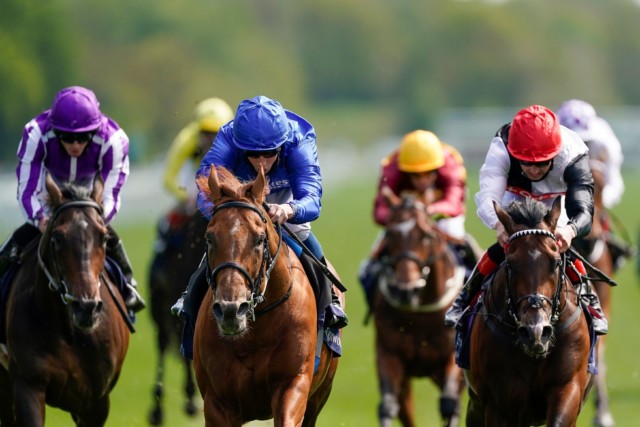 HURRICANE Lane stormed into Derby contention with an impressive win in the Dante at York.

The Godolphin-owned colt is now unbeaten in three starts and winning jock William Buick grinned: “There is more to come.”

Hurricane Lane is now 8-1 from 16s for the Derby

The bookies slashed his odds for next month’s Classic, with Ladbrokes cutting him into 8-1 from 16s.

And on this evidence he has a strong chance of giving Buick and trainer Charlie Appleby a second Derby in three years after 2018 hero Masar.

The complexion of the Dante – one of the most important Derby trials of the spring – changed completely inside the final furlong.

Hollie Doyle almost stole the race aboard 33-1 outsider Roman Empire on her first ever ride for Aidan O’Brien.

But he was swamped late by Hurricane Lane and Magallan, with the former stamping his authority in the race in the closing stages.

The formerly unbeaten High Definition, making his seasonal reappearance, threatened to fire a blank at the top of the home straight – but he eventually ran on into a never-nearer third.

He remains the 4-1 second favourite for the Derby behind stablemate and red-hot jolly Bolshoi Ballet.

Buick said: “This horse will improve for a mile-and-a-half at Epsom.

“Everything he does, he does it easily. He went through the gears nicely and he’s going from strength-to-strength.

“You can’t ask anymore of him. He has answered every call so far and that experience will have done him the world of good.

“He has never raced around a track like Epsom, but he feels very balanced so I think he will handle it just fine.”

John Gosden confirmed the runner-up Magallan would stick to 1m2f for the timebeing, and he earmarked the French Derby as his next target.

Earlier on the card, Queen Power was a dominant winner of the Group 2 Middleton Stakes.

The Sir Michael Stoute-trained filly streaked clear of a decent field to win by eight lengths under Silvestre De Sousa.

De Sousa said: “A combination of the ground and the pace of the race all contributed.

“She travelled nicely and I never felt in danger, she settled really well. When I asked her she put the race to bed very quickly.

“I think 10 furlongs is her trip, but that’s up to Sir Michael over where she runs.”