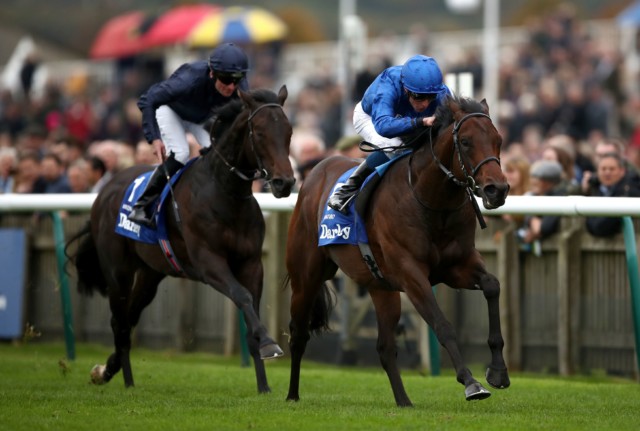 THE UNBEATEN Pinatubo is one of 15 entries for the 2000 Guineas at Newmarket on Saturday.

The Charlie Appleby-trained colt enjoyed a perfect juvenile campaign, including Group 1 victories in the National Stakes at the Curragh and Dewhurst Stakes at Newmarket.

Pinatubo heads 15 entries for the 2000 Guineas

He ended the season with an official rating of 128 – the highest since Celtic Swing achieved a figure of 130 in 1994 and 2lb higher than Frankel at the end of his two-year-old season.

He is set to be joined by stablemate Al Suhail, who was second in the Autumn Stakes at Newmarket, finishing half a length behind Military March, who is in line to represent Saeed bin Suroor.

The Andrew Balding-trained Kameko picked up Group 1 honours in the Vertem Futurity Trophy at Newcastle, while Ralph Beckett’s well-regarded Kinross is another leading contender for the home team.

Aidan O’Brien has a strong hand as his seeks his fifth win in the colts’ Classic in the last six years, and 11th overall.

Arizona, third to Pintubo in the National Stakes but closer to the red-hot favourite when runner-up in the Dewhurst, leads the Ballydoyle team.

O’Brien can also call on Wichita, Royal Dornoch, who beat Kameko in the Royal Lodge at Newmarket, and New World Tapestry.

Others to note include Roger Teal’s unbeaten Kenzai Warrior, the Richard Hannon-trained Mums Tipple, who was a runaway winner at the Ebor meeting, Brian Meehan’s Cepheus, successful on his only start at Newmarket in August, and Hughie Morrison’s Kempton winner Starcat.

Quadrilateral is the star name among the 17 contenders for the 1000 Guineas on Sunday.

Roger Charlton’s filly did little wrong on her debut before really impressing next time out and then coming home strongly to take the Fillies’ Mile over the Classic course and distance.

Jessica Harrington enjoyed a superb season with her two-year-olds and is set to run Cheveley Park Stakes heroine Millisle, with Mark Johnston set to reoppose with second home Raffle Prize, who will be ridden by Frankie Dettori.

O’Brien has entered Love, Peaceful and So Wonderful.

Did you miss our previous article…
https://www.sportingexcitement.com/horse-racing/fridays-itv-racing-coverage-live-stream-tv-schedule-and-race-times-for-itv-racing