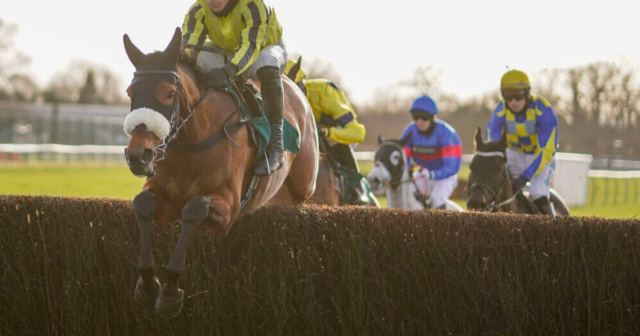 HARRY SKELTON was the Man in the Old Roan at Aintree on Sunday.

The Champion Jockey gave Allmankind a peach of a ride from the front to see off Itchy Feet and Midnight Shadow in a thriller.

Harry Skelton recently signed as a columnist with SE

The 9-4 favourite brushed off the top weight to take his record over fences to five wins from six and gift trainer Dan Skelton a memorable winner.

The legendary Monet’s Garden and Kauto Star are the only other horses to have won off 11’10 in the race’s history.

The winning rider smiled: “He’s unbelievable, he’s got the biggest heart going. He breaks every rule as a racehorse.

“On the Flat he was free and keen, backwards – but he’s just got a will to win like no other.

“I’m just the lucky man that gets to ride him. Dan tuned him to perfection, we knew he needed that run at Chepstow.”

Quotes of 10-1 for the Ryanair and 20-1 for the Champion Chase at Cheltenham were available but connections already seem set on a return to Merseyside.

Trainer Skelton said: “He might not even run again before Christmas, we’ll have to see with the owners.

“We know that Cheltenham isn’t really his track so we’ll probably have to come back to Aintree for the Melling.

“I can’t tell you how much I love him, he’s fantastic. He acts more and more like a stayer now, we’re very proud.”

In France, Scope capped a tip-top weekend for the Ralph Beckett team with a second Group 1 in two days.