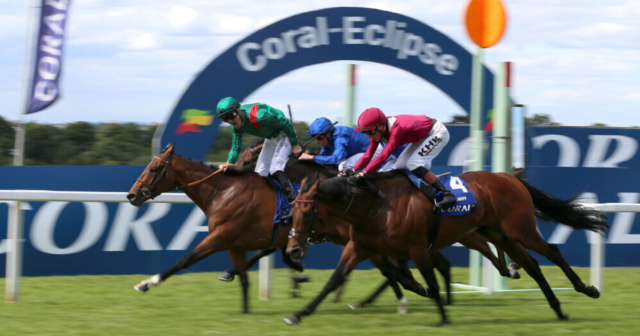 THEY don’t call him Super Soumi for nothing.

The brilliant Belgian’s special powers were on full display at Sandown as he partnered Vadeni to a narrow win in the Coral-Eclipse.

The French wonder horse looked in trouble at the bottom of the straight, but he was lifted home by an inspired Christophe Soumillon in a thrilling race.

The jockey has long been the man for the big occasion, and there aren’t many bigger occasions than this on the Flat in Britain.

The Eclipse is the first opportunity the three-year-olds get to take on the older horses – a race designed to sort the wheat from the chaff.

It’s the original generation game, but there is more on the line than a cuddly toy or a toaster.

Both Soumillon and trainer Jean-Claude Rouget know that, and they wouldn’t have encouraged owner the Aga Khan to cough up £50,000 to run Vadeni if they didn’t think he was a bit special.

When the 11-4 shot said ‘au revoir’ to his rivals 100 yards out it was clear their big gamble had paid off.

It ended France’s 62-year wait for Eclipse success, though jockey David Egan felt Mishriff was an unlucky loser in second as he was boxed in at a crucial stage.

Soumillon said: “When I came out of the turn the pace started to pick up, and for about 150 yards he was off the bridle a bit and I was a little worried.

“But as soon as he started to go up hill he really grabbed hold. I could see Mishriff was stuck on my inside, so I let him go.

“He lost balance for a few strides inside the final 100 yards but he really stuck his neck out.

“He is a really special horse and it is something special to win a race like this.”

There was a sting in the tail for Soumillon, 41, who caused interference after the winning post while punching the air in celebration.

He accepted responsibility – but the stewards took a dim view of the incident and hammered him with a harsh 12-day ban.

He said: “It was my fault, I shouldn’t have celebrated like that and not looked.

“It’s one more lesson in life. I’ve seen it all in my career but I exploded with happiness and made a mistake.”

Rouget has seen it all and then some during his 43 years as a trainer, but he said this win was right up there among his best.

He added: “We were a little anxious at the beginning of the straight, but after a 100 yards or so he came there easily.

“Christophe gave him a great ride and the horse showed his courage and his class.

“When I decide to supplement a horse like that, it’s because it’s my instinct.

“I knew it would be a real challenge, but like Almanzor, who won the Champion Stakes, this horse is a champion.”

Did you miss our previous article…
https://www.sportingexcitement.com/horse-racing/worlds-most-elusive-billionaire-and-racing-moguls-property-empire-includes-200m-yacht-and-biggest-private-jet-2/