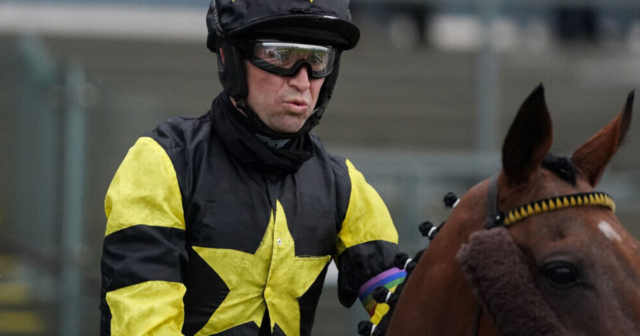 ROBBIE DUNNE admits he apologised to Bryony Frost after a ‘bit of road rage’ but denies he bullied his fellow jockey.

The 36-year-old said he would put Frost ‘through the wing of a fence’ after an incident at Southwell last year.

He blamed Frost for a fall that left him on the floor and his horse fatally injured but went on to claim it was just a threat and not something he was going to follow through with.

The Irishman said this was language used commonly in the weighing room after he was asked whether he had threatened to cause serious harm to Frost and her horse.

He told an independent panel on Monday: “I said it, but it’s just a common thing that gets said. It’s a matter of speech within the weighing room. I would never threaten another jockey with violence.”

Dunne’s lawyer Roderick Moore said earlier: “It’s Mr Dunne’s case the words spoken to Miss Frost in the weighing room were not a threat, but a rebuke.

“It is Mr Dunne’s case that the words were the words of a jockey who had had a heavy fall and was upset at the death of his horse.”

Dunne had already admitted before the hearing to a single breach of the rules of acting ‘in a violent or improper manner’ towards Frost in relation to this incident.

He denies charges relating to ‘bullying and harassing’ Frost at Southwell and at two other racecourses.

And at the hearing Dunne strongly denied shaking himself naked in front of Frost and said the allegations were ‘wildly exaggerated’.

Dunne said: “It’s not against the law to shake yourself.”

Louis Weston, the BHA’s barrister, quickly fired back: “I’m not joking about this, Mr Dunne.”

The rider responded: “I’m not joking. This is wildly, wildly exaggerated. I was in the male changing room, this was Miss Frost lounging around in the changing room and I certainly did not pull off my towel and shake myself at her. I had come out of the sauna and needed to weigh myself.”

The day started with Dunne’s lawyer listing an impressive roll call of jockeys that would be called by the defence.

But there was little in the way of fireworks when the riders were quizzed, even after the defence claimed Frost is renowned for cutting riders up in their opening. Dunne also said that other senior jockeys believe Frost can be an ‘irresponsible’ rider.

But the jockeys called weren’t asked to back these claims up and it was only when cross-examined that new details emerged.

Kelly, a Cheltenham Festival winner, said that Frost always stood out as she never accepted criticism from other riders in the weighing room.

Appearing on Zoom, she added: “I don’t think that it’s that she’s standing up to something she disagrees with, I think it was the fact that people tend to respect the opinions of other jockeys around them.

Sheehan’s statement referred to Dunne as a piss-taker and the class clown while Scudamore said he had been suspicious of Frost since the bullying allegations were made public.

The fieriest exchange of the day came when Dunne was grilled on his now deleted tweet that he sent before the Virtual Grand National last year and accused of lying about his evidence.

Weston said Dunne was ‘misogynistic’ and ‘bullied and threatened’ Frost because she had stood up to him.

The controversial tweet was sent minutes before the off of Virtual National in April 2020. It read: “If Yala Enki wins this cartoon race, will the interview be as far-fetched as they do be in real life.”

Weston said this was clearly made in relation to Frost, although Dunne claimed it could have been aimed at a trainer, owner or stable staff.

Dunne was asked FIVE times why he sent the tweet about Yala Enki and not any of the other 39 horses in the race. He would only reply, as in his statement, that it was ‘inappropriate and unprofessional.’

Weston blasted: “One last time, try harder. May I suggest you’re lying about it? Why did you do it?”

Weston concluded: “It’s not unprofessional. You were bullying her.”

Dunne faces a ban of up to three years and a fine of up to £15,000 if found guilty by the independent panel.

Closing arguments are due to be made by both sides today before a verdict will be reached. It’s not clear if that will come immediately after the end of the hearing. The hearing continues.

Did you miss our previous article…
https://www.sportingexcitement.com/horse-racing/gordon-elliotts-record-breaking-37204-1-seven-timer-completes-trainers-remarkable-comeback-from-photo-shame