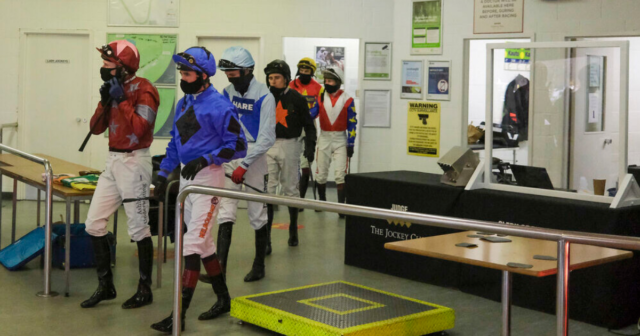 A BARBARIC weight loss technique that can ruin libido will make a comeback due to a new rule, a jockey has warned.

Top Flat jockey Tom Marquand has suggested making yourself vomit – a technique known as ‘flipping’ – could rear its ugly head in racing again.

Jockeys could resort to an extreme weight loss technique in order to maintain their low weight, which is checked before and after every race

“It’s not on – I feel like we’ve been cheated out of something we agreed to do” – @Jason7Watson1 is strongly against the BHA’s decision to remove the 3lb allowance jockeys’ were allowed over the pandemic, as he explains to @mickfitzg at @Southwell_Races pic.twitter.com/IAiWYonNX3

The British Horseracing Authority ran a campaign in 2017 to ward off riders from using the dangerous tactic.

Studies have proven the hazardous shortcut jockeys sometimes take to lose weight can lead to low bone density and lasting damage to the digestive system.

‘Flipping’ has a particularly notorious reputation after starting among jockeys in the US before reaching Britain.

Legendary rider Kieran Fallon previously spoke of its awful consequences, which included rotting the enamel off your teeth.

But Marquand thinks it could make a comeback after a rule change on minumum weights for jockeys.

The BHA permanently scrapped the use of racecourse saunas last November – but a 3lb allowance was granted to jockeys when they were out of use anyway during Covid.

Marquand, who is engaged to fellow star jockey Hollie Doyle, had a grim prediction for what the new measures could mean.

He told The Mirror: “It’s a step back – a kick in the teeth for everyone.

“It’s all well and good them taking away the saunas and saying it will be healthier but without the extra weight allowance it’s in danger of being even less healthy than before.

“Apprentices that are panicking that they can’t do the weight on their boss’s horse – they are not thinking sensible or healthy, they are thinking, ‘how am I going to do the weight?’

“One of the easiest ways to do that is flipping.”

He said: “I think the people that are making these decisions should come and live a day with us.

“It’s not on. I feel like we’ve been cheated out of something we agreed to do.

“We’re the ones living it.

“The people making the decisions are going home every night and having dinners and a good bit of sleep and not getting up and doing the driving, the hours we do.

“People have been getting bigger, heavier and taller for decades now and we need to move on.

“I’m disgusted by what’s been said and am totally against it.”

Defending the measures, a BHA statement released on Wednesday read: “The 2lbs weight rise was agreed by the industry Racing Group, which includes cross-industry representation.

“The process that was followed to implement these changes included consultation with jockeys, through multiple meetings with the Professional Jockeys Association.”