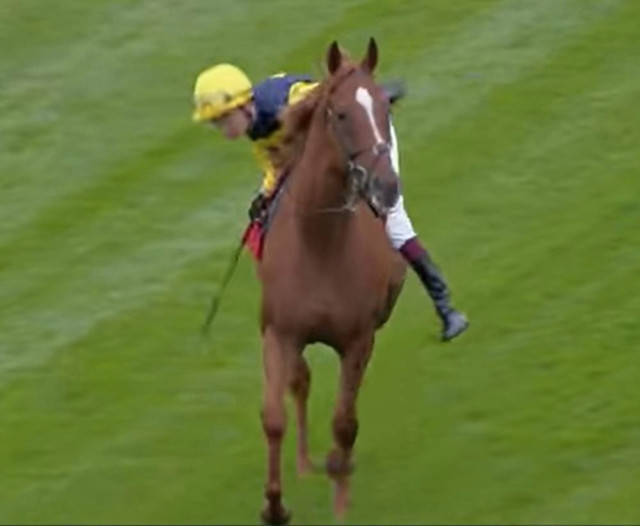 CHAMPION jockey Oisin Murphy takes a battering while trying to keep his cool during this terrifying pre-race incident.

Murphy was taking the unruly Canagat down to the start of a sprint at Epsom when the four-year-old gelding kicked off.

Even for someone as talented as Murphy in the saddle, when a 500kg beast capable of going 40mph bolts off, you can only hold on for dear life.

Murphy was left with no choice but to try to settle the horse as he kept going and going and going, faster and faster the wrong way round the racecourse.

The whole ordeal was made harder by the fact Murphy mounted the horse without his irons.

That meant he bounced up and down painfully in the saddle for the whole thing.

Severe discomfort and a wild horse equals a recipe for disaster.

Sure enough, Canagat dumped Murphy to the floor before running off again and eventually being caught.

Punters were in awe of Murphy’s ability to maintain at least some semblance of control.

But a number wondered mischievously how sore the 25-year-old Irishman would be the next morning after he bounced all over the track.

One user commented on a clip of Murphy’s ordeal: “The champion jockey’s crown jewels are getting a once round the block battering, scary stuff that riding.”

Another commented: “He’ll need some cream for his marriage tackle after that.”

Others were simply blown away by how cool the jockey looked given the speed the horse was charging.

One wrote: “How fast is that thing going? It’s making me feel sick.”

Another said: “His seat is a combination of super glue and sorcery.”

A fellow punter posted: “Some horsemanship that. Thankfully all OK, as that must have been a little scary even if you are a top jockey.”

While another wrote: “Jesus, that looked tough for Oisin Murphy. Did a blinding job to even get Canagat going. Hope he’s OK.”

Canagat was withdrawn from the race, won by William Buick, Murphy’s nearest challenger in the jockey standings.

In this article:Epsom, Oisin Murphy