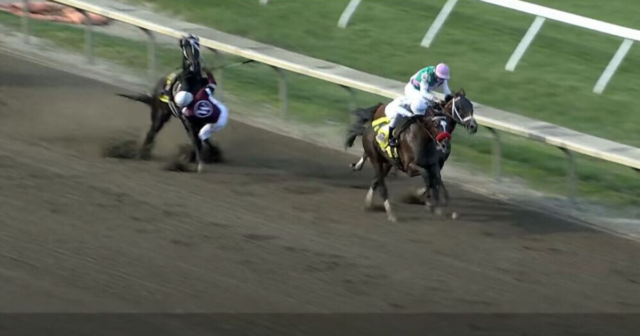 THIS is the incredible moment a winning horse is disqualified after causing a rival jockey to fall in a no-whip race.

Top racehorse Hot Rod Charlie – who came third in the Kentucky Derby – was first past the post in the 1m1f race at Monmouth Park.

The jockey fortunately avoided serious injury and the horse was unhurt after the mid-race fall
Prat was sent crashing to the ground after his horse clipped heels with the winner, who was then disqualified

Victory brought connections a whopping £437,956 – but they were robbed of that cash after stewards threw out the result.

Mandaloun, who came second in the race, was promoted to first and scooped the cash.

The drama happened in the final part of the mega-money American contest, when Hot Rod Charlie clipped heels with Midnight Bourbon.

That led to Midnight Bourbon’s jockey Paco Lopez being unseated, crashing to the deck as horses thundered past.

Lopez – who was punched by a rival during a post-race bust-up earlier this year – rolled on the floor in agony before being seen to by on-course medics.

He said he was kicked in the knee and couldn’t move it for ten minutes, but fortunately escaped serious injury.

“I felt pain in my tendon there, and I couldn’t move my leg for about ten minutes, but I am fine now.”

Connections of Hot Rod Charlie, ridden by Flavien Prat, believe the fact whips were banned played a big part in the incident.

The New Jersey Racing Commission brought the whip ban into place at Monmouth Park in May.

Prat said if he had a whip he would have corrected his horse, who started as 4-5 favourite.

He said: “Yes, the lack of a crop came into play. I was trying to correct him as much as I could.

“If I could have hit him just one time left-handed, we would have been just fine, but it is what it is.” 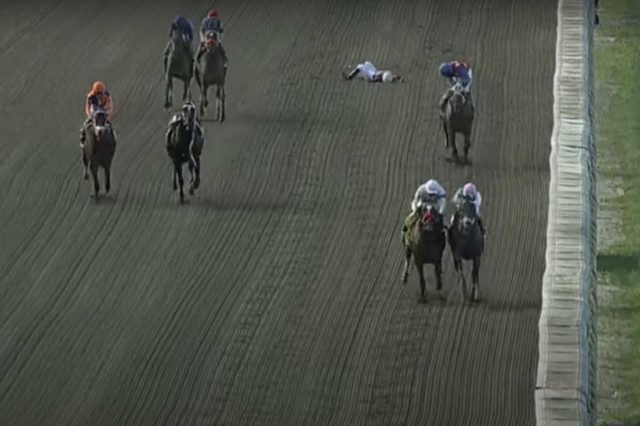 William Strauss, one of the five university mates who own Hot Rod Charlie, added: “Flavien has a good left hand and right hand so maybe if he hit him left-handed, he could have straightened him out, but that’s not what happened.

“Nobody else out there could use a whip, so it’s not an excuse.

“It’s a level playing field that cost us the race.”