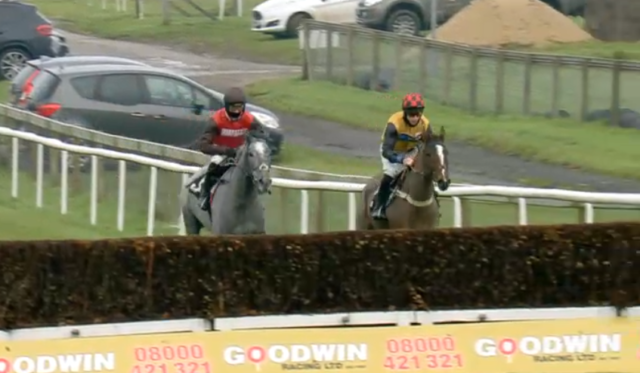 THIS is the dramatic fall at the FIRST fence of a two-horse race – leaving the other to run around totally uncontested.

Harry Cobden came crashing to earth aboard 1-2 favourite Stratagem just 11 seconds into the contest at Plumpton. 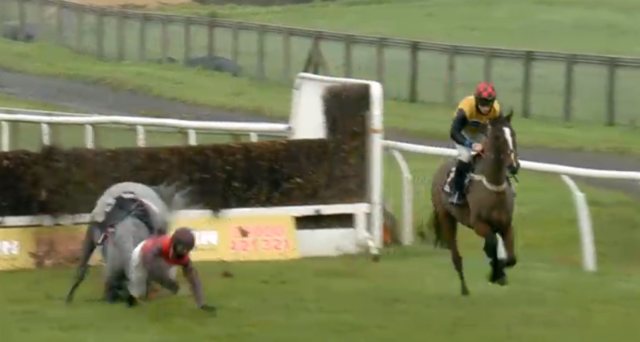 That left Gavin Sheehan on 13-8 shot Thebannerkingrebel a totally free run at the remaining 11 fences – and £9,000 first-place prize.

But even then he almost made a hash of it when totally losing his balance four from home and almost falling off.

Had both horses fallen then the race would have been voided.

But fortunately Sheehan regained control and strolled over the line to take the spoils.

And there was more good news as Cobden – who suffered a horror fall underneath charging horses at Newbury last month – and Stratagem were both OK after the accident.

Still, it’s likely their egos would have taken a bit of battering as the already slim contest was reduced to nothing.

And Twitter users who followed the action live let their feelings known online.

One said: “You know it’s a Monday when there is a two-runner at Plumpton which quickly becomes a single runner!

“Not exactly the stuff to get excited about.”

Another commented: “Two-horse race at Plumpton where the fav falls at the first. 2020 continues.”

One post read: “Well that was a cracking two-runner novice chase at Plumpton for all but five seconds.”

A fellow user said: “Peak jumps race happening at Plumpton! Doesn’t get much better than that, thrilling stuff.”

History was made at Towcester in March 2011 when four horses failed to finish a race.

Two horses had already gone when Adrian Lane was unseated at the last and brought down Peter Toole in the process, meaning the race was struck from the record.

Did you miss our previous article…
https://www.sportingexcitement.com/horse-racing/chelmsford-racing-abandoned-as-fog-causes-havoc-for-second-straight-day-with-card-cancelled-due-to-safety-concerns

Advertisement. Scroll to continue reading.
In this article:Chelmsford, Plumpton, Towcester