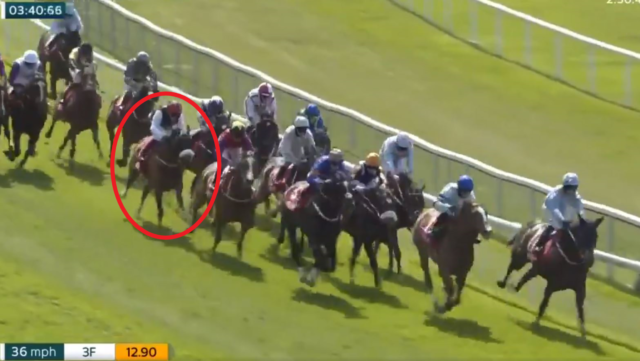 FRANKIE DETTORI produced an absolute masterclass aboard Falcon Eight to claim the Chester Cup – 30 YEARS after first winning the race.

Dettori, 50, worked the 15-2 shot round the outside turning in and found an electrifying burst of speed from the six-year-old.

The age-defying jockey, who just last Sunday claimed the 1000 Guineas aboard Mother Earth, waited patiently in the 2m2f feature race of the Boodles Festival.

But there was no panic, no desperation and, in the end, no sweat at all as he ran out a comfortable winner after a late charge.

The win put to bed trainer Dermot Weld’s fears for the horse beforehand.

The legendary horseman thought the good to soft going could scupper his horse’s chances – but those worries proved totally unfounded.

And with a furlong there was no doubt who would win under a vintage Dettori ride.

In fact, the only slip-up was when he stumbled performing one of his iconic dismounts!

You would have got good odds on racings most famous jockey waiting 30 years to land another, but how sweet this one must taste.

And the good news is he has time for more.

Dettori has hinted he plans to keep racing until he is 55.

And after this performance, who could blame him?