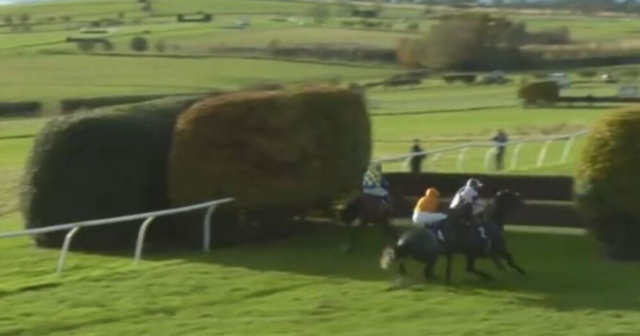 THIS is the bonkers moment two sets of jockeys and their horses disappear into a HEDGE during crazy final-fence scenes at Hexham.

Punters couldn’t believe it as 7-2 shot Fete Champetre, who was challenging for the lead, jinked right, bringing 7-1 Hasankey with him.

The horses are challenging for the lead when one jinks right, bringing the other with it
Both runners clatter into the hedge to the side of the final fence 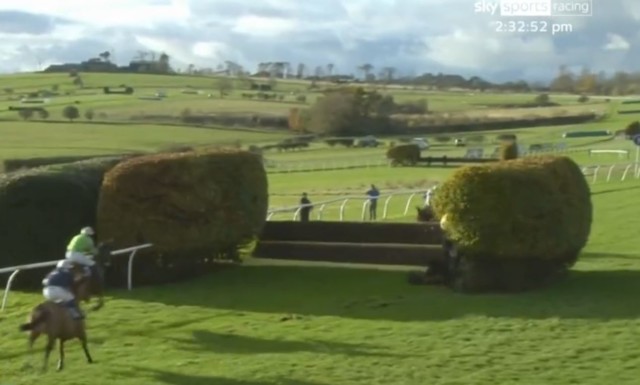 The jockeys and their horses clattered into the hedge and disappeared from sight completely.

And it was not until a few seconds later that they re-emerged, thankfully all unhurt and OK.

Sean Quinlan on 3-1 Crack Du Ninian was main benefactor of their freak incident, galloping to victory in the 1m 7½f Novices’ Handicap Chase.

Craig Nichol on the Rose Dobbin-trained Fete Champetre and Lewis Dobb on Laura Morgan’s Hasankey were the unlucky ones sent crashing into the hedge.

Punters were stunned by what happened – and relieved to hear there were no injuries.

Another wrote: “That’s how to hedge your bets.”

A fellow punter posted online: “Now you see them… now you don’t.”

While another said: “Damn, they got sent to the shadow realm!”

While another wrote: “Anyone seen Fete Champetre or Hasankey? Did they even exist in the first place? The first ever existential horse race.”

The bizarre scenes came on a crazy day of racing – which also saw the ‘winner’ of a race disqualified after a 34-minute stewards’ enquiry.

In between that pair was Paul Nicholls’ 2-1 shot Complete Unknown.

The tight finish went to stewards straight away so they could determine in detail who was the winner and whether any interference changed the result.

Initially, Unanswered Prayers, in the orange silks with black stars, was named first past the post.

But after more than half an hour – and at the expense of the next race starting on time – Unanswered Prayers was disqualified and Blue Stello named the winner, with Complete Unknown in third.

A statement read: “Following a stewards’ enquiry, Unanswered Prayers, who passed the post first, was disqualified and placed second.

“Blue Stello was awarded the race.”

Fortunately some firms paid out on the first past the post and the official winner.

But there was no such luck for those who wagered on the Hexham contest.