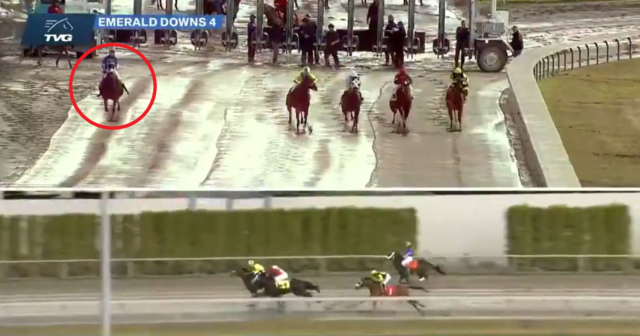 A JOCKEY pulled off a miracle in the saddle to win and leave the stunned commentator saying: “I’ve never seen that in 44 years.”

Alex Cruz was hailed for his ‘ride of the year’ contender after a victory that was nothing short of ridiculous on Akasi.

Cruz’s mount jolted off to the right at the very start of the race and his feet fell out of his stirrups, meaning he lost almost all of his control
The horse was still miles behind coming round the home bend

The two-year-old was running in just her fourth race under trainer David Martinez at Emerald Downs on Sunday.

And to be honest it looked like coming runner-up again was nigh-in impossible after she bucked right wildly out of the stalls.

The sudden jolt saw Puerto Rican rider Cruz lose his irons – a racing term for his feet coming out of the stirrups.

That is normally a nightmare for jockeys and means they can wave goodbye to all chance of winning because they are so out of control.

In fact, just staying upright can be an achievement in itself.

That looked to be the case for Cruz as he dropped back to last on Akasi while the remaining four runners bolted off ahead.

Detached and floundering, Akasi was so far behind at some points in the footage that the camera could not pan wide enough to fit her in.

But then somehow she kept finding more and more – as Cruz held on for dear life.

Making up ground rapidly on the outside and with the other jockeys low in the saddle, Cruz bounced along next to them.

And going down the straight in the 5½f race he was absolutely flying, overtaking all of them to win and land the £8200 prize.

No one was more surprised than TVG commentator Michael Joyce, who could hardly believe what he had just witnessed.

Stunned, he said: “You’ve heard of hands and heels rides. This is bridle and inner thigh and adductors rides.

“This is the most amazing thing.

“I always say, when you go to the racetrack there is a chance you’re going to see something you’ve never seen before.

“And in my 44 years I have seen riders lose their irons but I have never seen a horse win a race with the rider out of their irons the entire way round the racetrack.”

‘GET THAT JOCKEY SOME ICE’

Winning in that manner placed tremendous stress on Cruz’s body, especially his inner thighs – a point not lost on some mischievous punters.

One said in reaction to a clip of the race: “Get that jockey an ice pack.”

But most were just in awe of his horsemanship, which came on a track where the going was officially described as ‘sloppy’.

One commented: “This is so great on so many levels.”

Another wrote: “Ride of the year.”

A fellow Twitter user said: “This is why I say that jockeys are the best athletes in the world! WHAT A RIDE! That was thighs and bridle.”

While another posted: “Unbelievable. Never seen that at the track before. What a ride.”

Speaking of his remarkable victory, Cruz, who won four races on the card, said: “At the start, she stumbled and ducked out, that’s when I lost my irons.

“I tried to recover but it was so muddy and my boots were slipping.

“I was going to pull her up going into the turn, but when we started to gain some ground, we went on with it!”

‘RIDE OF THE YEAR’

The Irishman was on the unruly Canagat, who absolutely bolted to post before the jockey could get his feet in the irons.

Murphy somehow managed to hold on as the four-year-old sprinted at up to 40mph over Epsom racecourse.

And Hugh Morgan was praised for his ‘ride of the century’ contender after also winning without his irons – but this time over jumps! 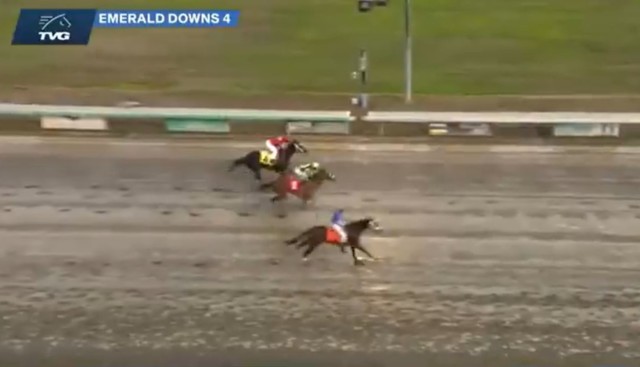 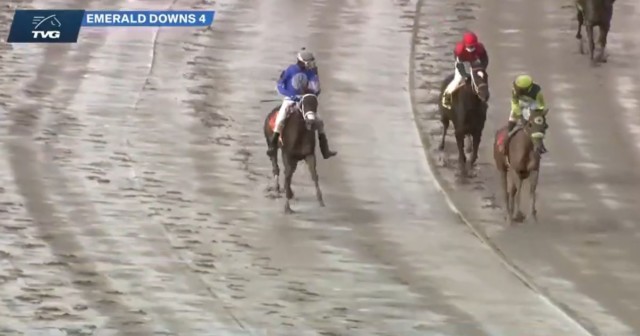 In this article:Epsom, Oisin Murphy