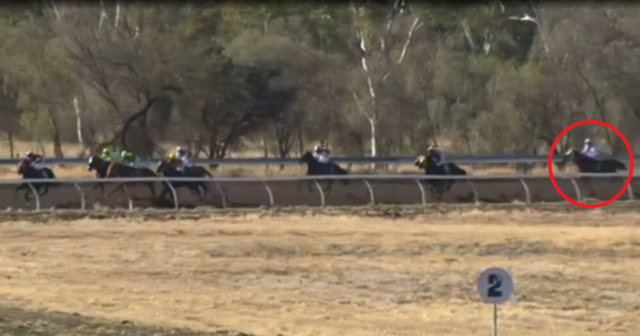 THIS incredible race saw a jockey labelled a ‘god among men’ for an unbelievable ride – that made a mockery of the commentator.

Jason ‘Grasshopper’ Lyon, 40, looked absolutely miles out of it when 20 lengths behind on Just Hang Up.

The eventual winner came from miles back and seemingly way out of contention to win
Even going down the straight, the winner had to pass every single horse

But the horse bolted up from nowehere to win after ‘s***ting himself’, according to the man in the saddle.

The miraculous win was so unexpected that the commentator even said the runner-up had won in the seconds before the line.

Unable to correct himself in time, the race caller could only manage a Gary Neville-style ‘ooooooh’ as 14-1 shot Just Hang Up pinched it on the line.

The win is all the more spectacular given the four-year-old had never won a race before, or even placed in seven previous dirt track runs.

And his antics before the gates opened in the five-and-a-half furlong race left Lyon fearing the worse.

The jockey told punters.com: “He was a heavy-headed bugger on the way to the barriers.

“And then he was a bit naughty in the stalls. I thought, ‘I’m going to have fun with this thing’.

“He just wouldn’t go at all early. I’ve been riding a fair few winners up here like that though since I came up here from Melbourne, so I didn’t exactly panic.

“I’ve ridden four or five that have just dropped right out the back. But they just go that hard up here at Darwin and Alice Springs – they go that quick in front.

“From the leader at the furthest point, I reckon I was 20 lengths back.

“Just before the 500m mark, I started roaring at him – like, ‘get going, son’ – and he s**t himself a bit and started stretching out.

“A couple of cracks on the left and he put in some nice strides around the turn and I thought he might run a nice fourth or fifth down the outside.

“He was picking up but he was hanging in a bit as well, but at the 200m I thought, ‘jeeze, he’s actually a chance to pinch a placing here’.

“Then at the 50m I thought he might get the coin – he was enormous late.

“Even the poor caller called the runner-up home, he went with the early crow which was fair enough.”

Lyon said rival trainers and jockeys had got in touch with him about the ride at Alice Springs racecourse in Northern Territory, Australia. 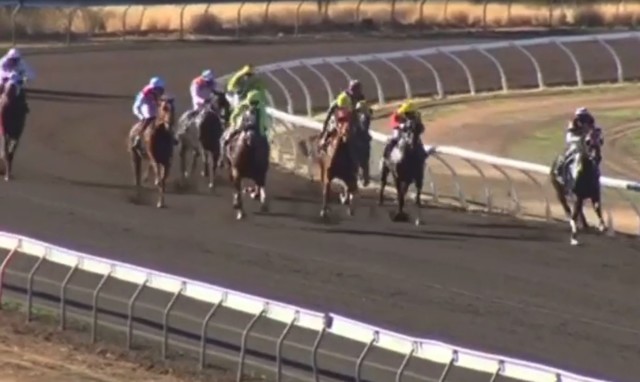 The camera could barely keep Just Hang Up in shot

It looked almost certain one of the leading three would win, with Lyon right at the back 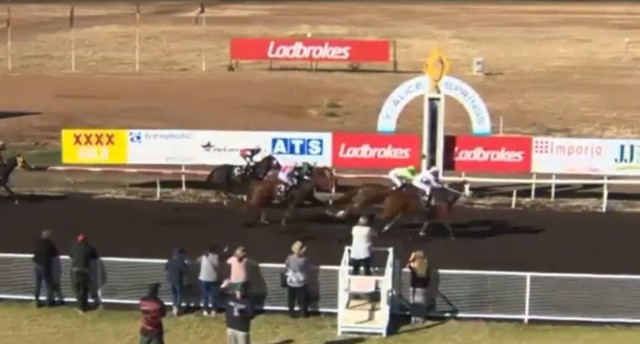 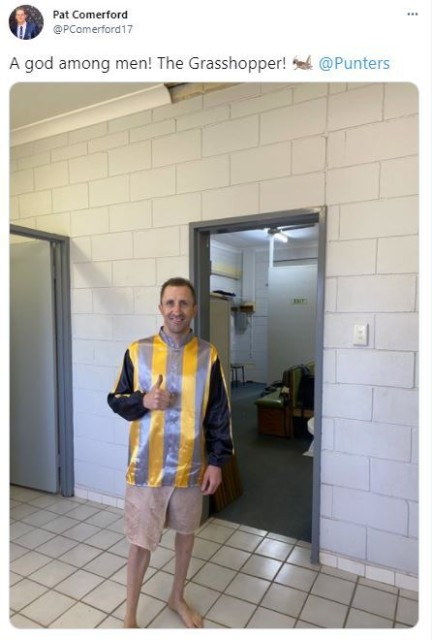 He said: “Jarrod Todd said to me earlier, ‘how the hell did you win on that horse?’

“It’s probably a fair enough question – it didn’t have any form at all.

“Greg Connor [trainer of runner-up Alice Band] called me this morning – he was bloody dirty – he couldn’t believe I knocked his horse off on the line.”