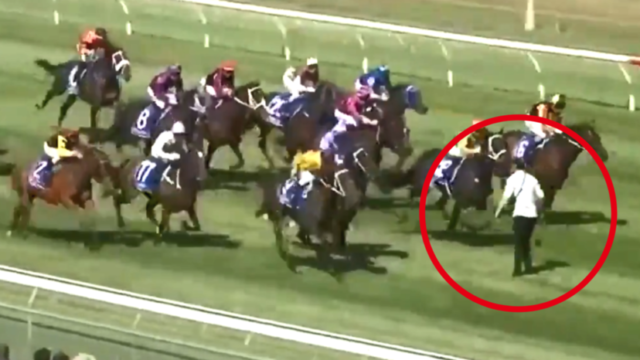 HERE’S the crazy moment a ‘staggeringly stupid’ spectator risked his and others’ lives by stepping into the middle of a race.

The jockeys hurtling down the track at close to 40 miles per hour somehow managed to avoid the streaker.

The horses were close to the end of the race, less than a furlong from home, when disaster was miraculously avoided.

The man appeared to step onto the racecourse at Trentham in New Zealand in the eighth race on Wellington Cup day.

Somehow the jockeys were able to dodge the man despite only seeing him very late in the day.

Local reports suggest the man has been arrested by police and could be charged with endangering public safety.

The incident caused outrage in the racing public with many punters and presenters quick to criticise the man.

Racing presenter Emily Bosson, said: “This guy does not realise how much danger he is putting everyone in.”

If that wasn’t enough drama for the fixture, cameras later picked up two naked punters running next to the track!

Did you miss our previous article…
https://www.sportingexcitement.com/horse-racing/bryony-frost-hints-at-yala-enki-grand-national-tilt-saying-he-is-feels-a-million-dollars-and-has-the-stamina-needed