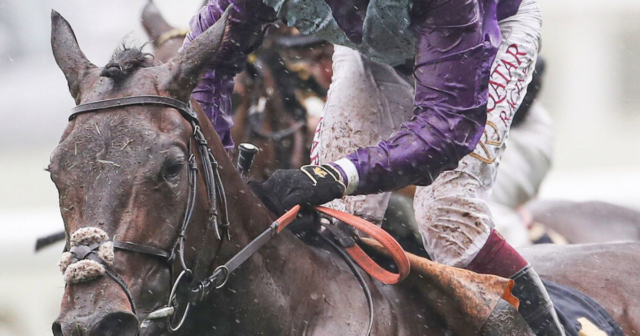 JOCKEY Oisin Murphy was praised by punters for issuing an extraordinary apology after a ‘nightmare’ ride, admitting: “I should have won.”

The reigning champion jockey is in an almighty tussle with rivals William Buick and Tom Marquand for the Flat championship this year.

Nightmare for Peggoty backers! Kensington Agent and @linusghiani99 hold off the late run of the odds-on favourite to win at @BathRacecourse for @AWCarrollracing… pic.twitter.com/VhwZNunkUD

It looked like Murphy was all set for win number 56 aboard odds-on favourite Peggoty in the 2.05 at Bath on Tuesday.

The Irishman, 25, went into the race fresh off victory in the race before on Michael Bell’s 5-2 favourite Tardis.

He looked to be in prime position to strike again on 5-6 Peggoty but was forced into a late move for space.

The desperate switch robbed Murphy of the shortest route after he had been hugging the rail, and he went down by a head to Marco Ghiani on 14-1 shot Kensington Agent.

Had he not gone out wide then it looked like Murphy would have had more than enough in the tank to win.

He knew as much afterwards when speaking to Sky Sports Racing.

There, brave Murphy took the rare step of actually apologising to those who backed his horse.

He said: “Apologies to anyone who supported the horse. It was my fault.

“I thought the gap would open at some stage and then I shifted right and it actually opened up where I was.

“If I had stayed where I was for another stride I’d have won.

Asked by presenter Bob Cooper how he could possibly have known the space would open up a split-second after he changed route, Murphy was brutally honest.

Punters were blown away by Murphy’s honesty and praised the jockey for fronting up.

One said: “Oisin Murphy coming out and apologising for a poor ride on a well backed favourite.

“No need to apologise as he always gives it his all, blokes an absolute class act.”

Another said: “Don’t think I’ve ever heard a jockey apologise before, good on you Oisin Murphy.”

One comment read: “I wish all the other jockeys,trainers and commentators could be as honest as Oisin Murphy, apologising for his mistake.

Advertisement. Scroll to continue reading.
Murphy showed real determination to come back and win in the next race

“It sure is refreshing and it will stop a lot (not all) of the abuse they get.”

Murphy must have gained some good karma for his candour because he bounced back with a winner in the very next race in one of the finishes of the season.

True Romance, the 9-4 favourite, won by a shoulder from Marquand’s Good Impression, with Buick a further nose behind on 13-2 Merlin’s Beard.

In this article:Bath, Oisin Murphy