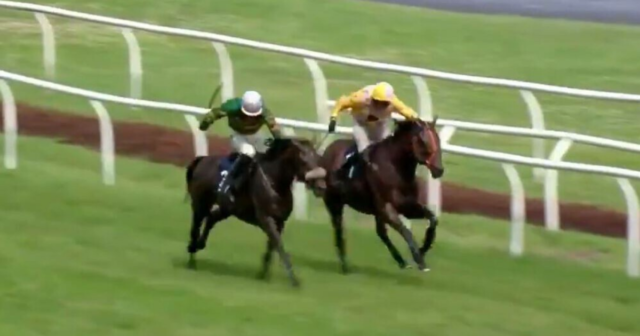 THIS is the brilliant moment one plucky punter ‘made it rain’ after landing a giant 33-1 winner.

The bettor’s hilarious reaction was caught live on TV during racing from Newton Abbot on Monday.

The horses fought out an absolute thriller at Newton Abbot, with the 33-1 shot winning at the death

He was heading off to collect his winnings after somehow picking out Candyman Can in the 4.05 over fences.

The 11-year-old last won a race anywhere in December 2015, a 1m4f contest on the all weather at Kempton.

But after five-and-a-half years in the wilderness – which included being beaten by a total of 89 lengths on his last two starts – he romped home to show class is permanent.

Good job the punter kept faith then, after Candyman Can saw off 4-1 joint second-favourite Joly Maker in a thriller.

The runner-up, owned by billionaire ex-Manchester United shareholder JP McManus, looked to have the 2m5f contest in the bag approaching the post.

But Candyman Can showed great grit to reel the leader in and win by a neck at the death.

And as well as landing the punter a decent return from his big odds, Candyman Can gave trainer Laura Hurley her first win of the season.

That was worth a decent £2,831 prize for connections too.

The winning punter’s reaction had viewers in stitches

But all anyone was interested after the line was the punter’s reaction, known as ‘making it rain’.

He mimicked throwing loads of cash around before punching the air in delight after the winner.

Viewers were loving it too.

One said: “Hahahaha what a guy.”

While another commented: “Brilliant.”