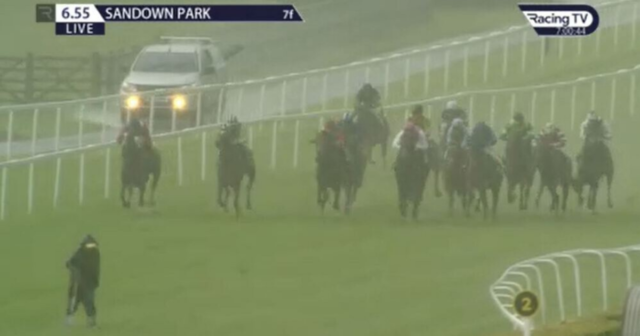 THIS is the simply unbelievable moment a dopey groundsman gets the fright of his life after failing to see 13 horses charge at him mid-race.

The shocking footage was captured at a rain-battered Sandown Park last night. 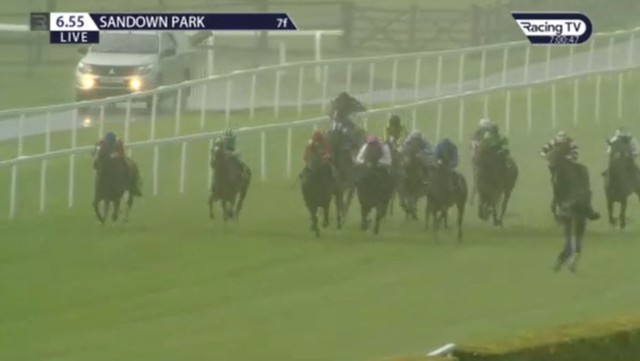 As horses charge down the straight at 35mph, the groundsman is shown ambling through the centre of the track.

Quite how he had no idea a race had started and that these 500kg animals were rocketing towards him is a mystery.

But fortunately he sees them just in the nick of time, jumping into action and sprinting out of harm’s way.

The dangers are clear though and it is a minor miracle no one, horse, jockey or groundsman, was injured.

Punters could not believe what they had seen watching at home.

One said: “Never ceases to amaze me how incidents still happen with British horse racing.”

Another commented: “That bloke should be sacked. What an idiot!”

One wrote: “This takes the biscuit for incompetence and negligence.”

Another comment read: “Surely that groundsman could hear a huge pack of horses running towards him?”

While a fellow punter made light of the near-miss, saying: “Probably running faster than the horses in them conditions.”

Racing was abandoned on safety grounds after this contest, the 6.55 won by 13-2 El Bodegon for jockey Daniel Muscutt and trainer James Ferguson.

A statement from Sandown Park read: “Very sadly we are forced to abandon racing at Sandown Park this evening due to the impact of heavy rain on the racing surface.

“The final decision was taken by the independent stewards and approved by the BHA.”

Incredibly, this is not the first time this year someone has nearly been trampled by horses.

In New Zealand a man was filmed risking his life by running into the middle of a race.