‘What have I just witnessed?’ – Jockey banned after incredible ride on 50-1 winner who was given an ‘uncontested lead’
Advertisement 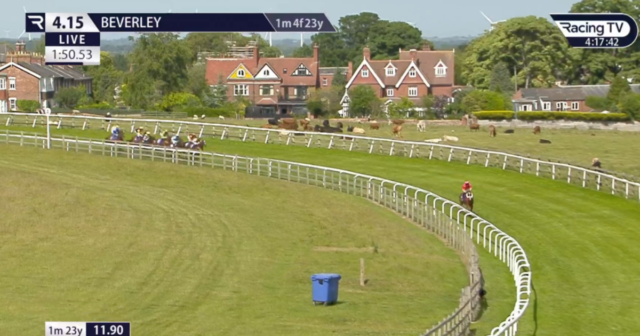 THIS is the incredible race which saw a 50-1 winner romp home after being given an ‘uncontested lead’ – only for the jockey to then be banned.

Punters could not believe what they were seeing as rank outsider Calculus went from last to leading by miles at Beverley.

Calculus springs a 50/1 shock at @Beverley_Races 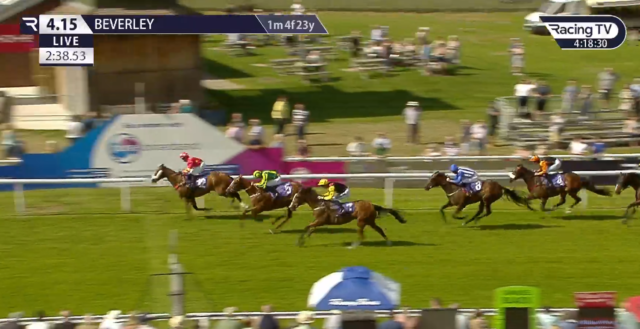 Calculus just held on to win the £3,186 first-place prize in a remarkable race

Apprentice jockey Kieran Schofield looked to be struggling to contain the keen five-year-old in the early stages.

So, racing out wide, he decided to let the gelding go.

And go he did, absolutely taking off and establishing a 20-length lead in the 1m4f race.

It looked for all the world like he had used up all his energy and would come back to the chasing pack.

But Calculus kept finding more and more, beating off the fast-finishing Termonator to record his first ever win in his 17th race.

An outcome like this always sparks punter chatter, mostly centred around how the other jockeys could let the leader go so far in front.

And stewards did interview the eight other jockeys to find out their intentions during the race.

The British Horseracing Authority report noted Calculus ‘had been allowed to establish a sizeable uncontested lead from approximately one mile out’.

They also dished out a two-day ban to the winning jockey after he was found to have used his whip too much in the final three furlongs.

One punter watching the race said: “Fair play to the winner, but how often does this happen when one flies off in front, and the same jockeys don’t learn the same lesson?”

Another commented: “Too many jockeys seem to be sitting back these days and not taking the ride from the front – just goes to show great decision-making pays off.”

While one Twitter post said: “What have I just witnessed at Beverley? Calculus goes miles clear and somehow manages to hold on at the finish! Remarkable.”

Indeed, the stewards’ report read: “All riders were of the opinion that when CALCULUS (IRE) took up the running the gelding appeared to be running freely at a pace which they felt was unsustainable, believing that CALCULUS (IRE) would weaken and come back to them in a latter stage of the race.”

There was nothing but joy for Sara Ender though, trainer of this son of Frankel.

She said: “That was completely unexpected. He’s always been the same at home, he’s lazy, never works very well and the run was going to be his last run before retirement – it won’t be now!”

This race was reminiscent of The Steward’s mindblowing win at Newcastle last year.

Charlotte Jones was given a similarly massive lead on the front-runner, winning in a fashion that stunned former Love Island star Chris Hughes.