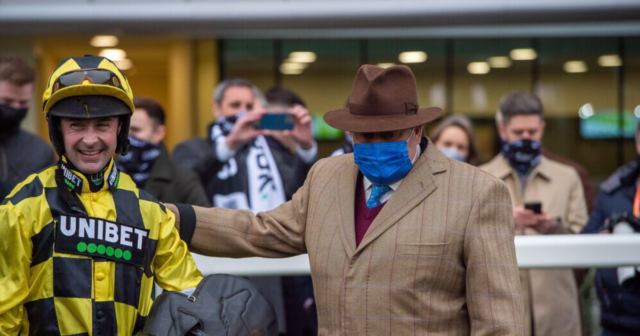 NICKY HENDERSON can edge back into second place in the trainers’ championship as he cranks up his top dog challenge at Cheltenham today.

The Seven Barrows wizard has been playing catch up most of this season, and has Dan Skelton splitting him and the current champion Paul Nicholls for the No1 spot.

Henderson, buoyed by Shishkin and De Boinville, is flying into form at just the right time

But on the back of Shishkin’s huge Clarence House success at Ascot last Saturday Henderson is flying high.

And today ‘Hendo’ fires three big salvos at the home of jumps racing in Chantry House, Champ and Balco Coastal.

Henderson might also think he has a live chance with Fusil Raffles – a former Grade 1 winner – in the Sky Bet Handicap Chase at Doncaster.

Some good horses have landed the Paddy Power Cotswold Chase over the years, the race in which Henderson saddles Chantry House.

That said, considering it’s a Gold Cup trial not many have done the double.

Indeed, since it was first run in 1980 you could argue it has become a better prep for the Grand National.

That said, Little Owl, Master Oats and Looks Like Trouble took the Cotswold before their Gold Cup success.

Notable non stayers One Man and Cyfor Malta have also been successful.

If there is a Gold Cup winner in the field today it has to be Chantry House.

He’s only been beaten three times in his career and has a third to Shishkin in a Supreme and a Grade 1 success over fences at Aintree to his name.

The problem for Chantry House fans is he ran an absolute shocker in the King George at Kempton on his seasonal return, eventually being pulled up.

Cheekpieces are stuck on him and the outstanding Nico de Boinville will have to hope they help.

Rather oddly De Boinville is not on board Champ, with his owners keeping the faith with Jonjo O’Neill Jr after the pair teamed up to land the Grade 1 Long Walk Hurdle at Ascot last time.

CHAMP BACK TO HIS BEST

Five horses have won the Cleeve and Stayers’ Hurdle in the same season, while Flakey Dove did the Cleeve/Champion Hurdle double in 1994.

Once upon a time, Champ, named after legend AP McCoy, was considered a Gold Cup horse himself, but he only ran twice last season and was pulled up in the Cheltenham Gold Cup when his jumping went to pot.

The now ten-year-old has had all sorts of operations to help him out, and was back to his very best in his return win where he had the re-opposing Paisley Park back in third.

The decent ground here will do no favours to Paisley Park, who has been crying out for heavy conditions all season.

He actually ran on well in the Long Walk for Emma Lavelle, but he’s going to get outpaced here if Champ is in the same form.

Balco Coastal is up against the giant Hillcrest in the Grade 2 Ballymore Novices’ Hurdle.

The former is turning into a star for Henry Daly and is rather suggesting size does matter being over 18hh.

That said, Balco Coastal is a terrier and won’t be easy to beat with De Boinville back in for another huge ride.

Decent horses have won this like Monsignor, Wichita Lineman, Bobs Worth and Protektorat.

Balco Coastal would be a fifth victor in the race for Henderson.

Incidentally, over at Doncaster watch out for a thrill in the Grade 2 Watch off the Fence on attheraces.com Lightning Novices’ Chase.

Both Third Time Lucki and For Pleasure like to go off like crazy horses. There will be some pace on.

As for my Nap today, well it goes to a big-priced runner in the Paddy Power Cheltenham Countdown Podcast Handicap Chase at Cheltenham.

Spiritofthegames has been poor over hurdles and fences on his last two starts, but they have both been over a trip he doesn’t stay.

Just three runs ago he was a decent ninth of nineteen behind Midnight Shadow in the Paddy Power Gold Cup, and he was a real eye catcher that day.

He raced off 144 for Dan Skelton then, but with Jack Andrews taking 5lb off is effectively off 132 this afternoon.

Spiritofthegames is getting on, but he loves Cheltenham and if he’s going to bounce back this is the time.

Worth a few quid each way – all in good spirit of course.

Did you miss our previous article…
https://www.sportingexcitement.com/horse-racing/meet-the-glamorous-23-year-old-jockey-who-has-already-made-2-5million-and-drives-a-mercedes-benz

In this article:Aintree, Ascot, Cheltenham, Doncaster