Why I was wrong about Shishkin, Tony Bloom out for revenge & credit to Moore for ride on ‘mentally scarred’ Goshen
Advertisement 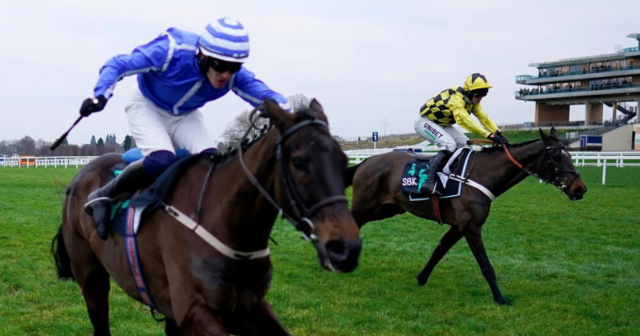 IT’S in defeat, not victory, that you see people’s true colours.

That is what made Shishkin’s victory over Energumene in Saturday’s Grade 1 Clarence House Chase at Ascot so special.

Paul Townend congratulated Nico de Boinville immediately after the race. Ireland’s champion trainer Willie Mullins smiled and spoke as only he can with calmness and dignity.

But what about Tony Bloom, the owner of Energumene?

Bloom knows all about winning and losing, as he’s owner of Brighton & Hove Albion.

He’s also a punter. A big punter, and a master poker player.

So I asked Bloom how the Clarence House was for him, and he said: “An unbelievable race. I thought we’d won it when Energumene jumped the last.

That’s the beauty of Bloom being the owner of Energumene. He will want revenge.

And he believes his boy is an absolute beast.

I made it very public that I thought Shishkin would win Saturday’s showdown.

But in many ways I was wrong, as I thought it would be alot easier than it was.

Tactically I think it was a mess for Shishkin, even at the start and first fence, when First Flow went right and Shishkin went left, meaning De Boinville was on the outside of First Flow when he wanted to be on the inside.

I suspect Shishkin will be much better suited to Cheltenham.

But that does not mean the Champion Chase will be a gimme. Like everyone else I can’t wait for round two.

Jamie Moore was seething after Goshen nearly pulled his shoulder out of his socket such did the horse hang at Lingfield on Sunday.

It’s extraordinary how Goshen’s career has gone since that trip in the Triumph Hurdle when he was on the verge of a huge win before unseating Moore at the final flight.

I can only think that Goshen has been scarred mentally by that incident. He’s not been the same horse since.

Back to Moore. Not every jockey will speak, or speak well, after finishing last in any race especially when they are thoroughly miffed.

However, in this case Moore was absolutely brilliant when I chatted to him on ITV.

Moments like that are amazing for viewers. What a thoroughly decent lad.

Incidentally Jamie has all his kids at the track and the Missus – I hope the journey home was OK!

EYES ON THE PRIZE… MONEY

Prize money counts. And it counts a lot. But picking the right types of races to chuck it at is key.

The Lingfield Winter Millions meeting was clearly a success and the victories of Metier and Two for Gold were a big hit with ITV viewers.

A big shout out for Dashel Drasher and Bristol de Mai who were both so brave in defeat.

And also, of course, to Master Tommytucker who was being given a beautiful ride by Harry Cobden before fatally coming down.

Kim Bailey was adamant Two for Gold was only running because of the prize on offer.

Clearly, though, the hurdle events landed by Brewin’upastorm and Top Ville Ben were not supported as one would have hoped.

No doubt changes will be made, but the concept is a fine one.