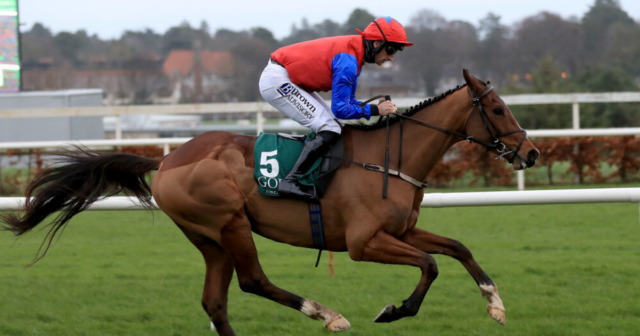 MAGIC Willie Mullins stole the show on the opening day of the Dublin Racing Festival.

The 65-year-old maestro cast his spell over Leopardstown with a 235-1 four-timer headlined by the brilliant Facile Vega.

Most trainers spend a career waiting to win a Grade 1, Mullins swooped for three in one afternoon.

“We’re very happy with that!“ smiled Mullins. You can say that again.

Blue Lord may have needed a final flight error from Riviere D’etel, but there was no fortune involved in Minella Cocooner’s, Vauban’s or Facile Vega’s victories.

Mullins’ day got off to the perfect start as Minella Cocooner led his rivals a merry dance in the opener, a Grade 1 Novice Hurdle.

Given a canny ride from the front by Mullins’ nephew Danny, the 11-1 shot was never passed as he cruised to a cosy win from Minella Crooner.

Bookmakers cut the six-year-old into 6-1 second favourite for the Albert Bartlett at the Cheltenham Festival.

The winning jockey smiled: “He’s very slick at his hurdles for a horse that stays well. All the way down the back he was getting a length or two at each hurdle which allowed me to fill him up.”

The Triumph Hurdle picture has become a lot clearer in recent weeks, none more so than after Pied Piper’s impressive win at Cheltenham last weekend.

Vauban was second to him on his last start and joined him at the top of the antepost Triumph market after he improved on his debut outing in the Grade 1 Juvenile Hurdle.

In Rich Ricci’s famous pink and green silks, he cruised into the lead in the straight and was always keeping 6-5 favourite Fil Dor at bay.

Ricci said: “When I saw what Pied Piper did I was hoping he’d come on and there’s more to come. That was very impressive for a four-year-old.”

Paul Townend rode a double on the day for Mullins
Advertisement. Scroll to continue reading.

Blue Lord got in on the act next as he passed Riviere D’etel late in the day in the Irish Arkle.

A mistake from his rival at the last allowed jockey Paul Townend to squeeze past on the outside to bring up number three for Mullins. The seven-year-old was left unchanged as the 11-4 favourite for the Arkle at Cheltenham.

But the best was saved for last as Facile Vega, out of Quevega, lived up to his blockbuster billing. He flew to a mighty 12 length win and is now odds-on with some bookies for the bumper at Cheltenham.

Jockey Patrick Mullins said: “That was a bit wow, he’s a bit special I think!”

But not to be left out, Gordon Elliott still struck and in the race that mattered most – the Irish Gold Cup.

He had his jockey Davy Russell to thank as he steered the unconsidered 18-1 shot Conflated to a cosy seven length win. As long time leader Frodon tired, Russell kicked on and left his rivals flat-footed at a key stage.

A winner of a Navan handicap last time out, Elliott’s new star is now only 7-1 for the Gold Cup with Paddy Power.

Elliott said: “I had to beg them the other day to even let me run the horse in this race! 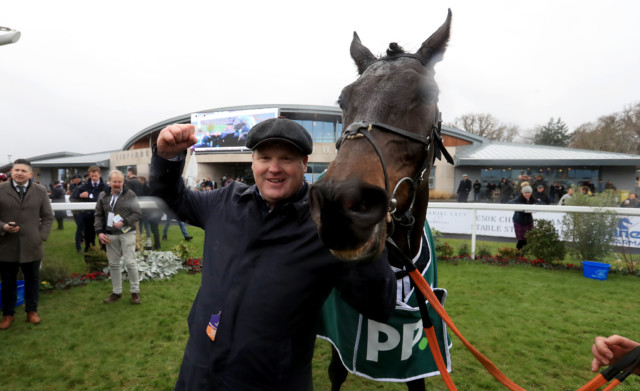 Elliott was all smiles after the Irish Gold Cup

“Michael’s at the Six Nations so hopefully he was watching, I know he would have enjoyed that.

“Knowing him we’ll be going to the Gold Cup, but he’s in everything. He’s got a big engine, but he’s quirky.

“I thought Davy had gone too soon, but you can’t second guess that man!”