‘Women are afraid, they get touched up when someone’s drunk’ – Police to combat ‘lack of control’ at Cheltenham Festival
Advertisement 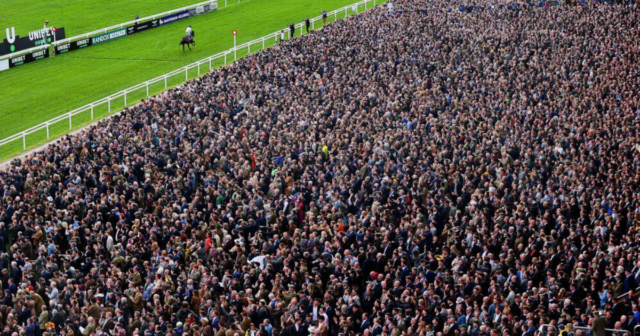 POLICE are vowing a strict crackdown on bad behaviour at next year’s Cheltenham Festival.

The biggest and best week of racing all year attracted a record crowd of more than 280,000 over four days in 2022.

But with it, police say, comes a ‘lack of control’ through excess drinking and, in some cases, drug use.

Cops also say women are made to feel afraid after being ‘touched up’ by drunk people during the week.

An action plan has been agreed between police, local MPs and The Jockey Club to combat what locals have called ‘distressing’ scenes.

One of the most alarming is the three per cent increase in the percentage of women feeling unsafe on Cheltenham’s streets at night during the festival.

Gloucestershire’s Police and Crime Commissioner Chris Nelson said: “I’ve spoken to a lot of women. They get touched up, there’s misogynistic behaviour when someone is drunk.

“That’s the sort of behaviour that women feel afraid of during race week.

“The borough’s own survey revealed quite a high number of women feel uncomfortable. It’s one of my priorities.”

A 2021 survey by the local council said 75 per cent of women ‘feel unsafe on the town’s streets at night during festival week’.

This is a three per cent rise from typical weeks.

Nelson went onto talk about the apparent use of cocaine and cannabis as well.

He said: “Cheltenham has a bit of a problem. Recreational drugs such as cannabis and cocaine are sadly on the increase.

“I think too many people think there are no adverse consequences. It leads to all sorts of other crime.

“There’s no shortage of activities we can do in order to fight drugs.

“Definitely from my point of view I’ll give that more attention.

“When you get drugs as well as alcohol you get lack of control.

“I’m keen to make sure changes are implemented.”

The prospect of a five-day festival was also mooted – and the extra burden it would place on police.

Nelson is quoted in the Racing Post as saying: “It would be an additional load on the police and a serious load.

“What happens is other things in the force have to go on the back burner so it wouldn’t be without consequences.”