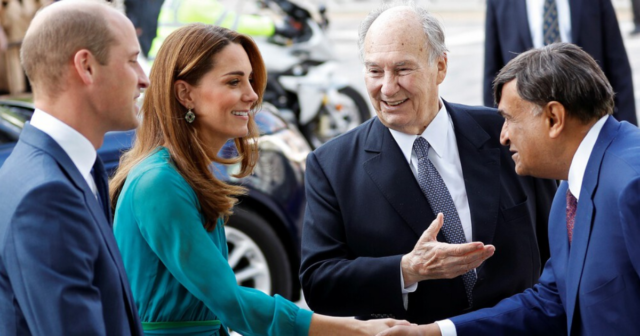 HE has been called the ‘world’s most elusive billionaire’ and boasts a sprawling property empire that includes a £200million superyacht and the biggest private jet on the planet.

A racing mogul who owned arguably the most famous horse ever, he is a spiritual leader and made headlines for a divorce rumoured to have cost £50million.

The Aga Khan, middle right, has been called the ‘world’s most elusive billionaire’ and can count royalty among his friendsThe Aga Khan’s amazing £200m superyacht was beset by construction challenges

Estimated to be worth up to £9.5billion, the Aga Khan lives a life even multi-millionaires can only dream of.

That vast wealth – much of which is used for philanthropic purposes – has also allowed him to indulge in, among many other things, his love of racing.

The owner of infamous racehorse Shergar, he is one of the world’s most successful racing magnates and even splashed £2.2m on the restoration of what has been labelled ‘the most luxurious stables ever built’.

Based in Chantilly in northern France, the yard was originally constructed by an 18th century French prince who believed he would be reincarnated as a horse.

That, as far as we know, never happened and the property fell into a state of disrepair before the Aga Khan stepped in.

Now, towering over the grounds is a jaw-dropping chateau, enough room in the stables for 250 horses and a sign welcoming the public to look around.

Truth be told though, spending more than £2m on this was a mere drop in the ocean compared to the £200m the 84-year-old is said to have spent on his superyacht.

Named The Alamshar after one of his horses, the vessel was commissioned in the 1990s with the objective of being the fastest in the world.

A stunning 174ft palace on the seas, the yacht was beset by ‘challenging’ construction issues and wasn’t actually finished until 2014.

Issues aside, the jaw-dropping yacht, which is powered by six gas turbines and 112 water jets, looks incredible out at sea.

While in the sky his recently purchased Bombardier Global 7500 – which claims to be the world’s biggest private jet – really stands out.

According to manufacturer Bombardier, the Global 7500 has a ‘luxurious interior with four true living spaces, a full size kitchen and a dedicated crew suite’.

With properties all over the world that can come in handy when the Aga Khan, a leader to some 15 million Ismaili Muslims, wants to jet off to the island he owns in the Bahamas.

Reportedly purchased for just over £73m in 2009, the 349-acre private retreat was once said to have had Hollywood stars Johnny Depp and Nicolas Cage as neighbours on their own nearby private islands too.

But despite the jets and yachts, it hasn’t always been plain sailing.

The Aga Khan made headlines in 2014 when it was reported his divorce to second wife Gabriele Thyssenn was settled for £50m.

Still, the ‘world’s most connected man’ – as he was called in one article – can rely on a vast network of friends for company.

That has included the Queen and William and Kate, who the Aga Khan was pictured alongside in London in 2019.

The Global 7500 is the world’s largest private jet 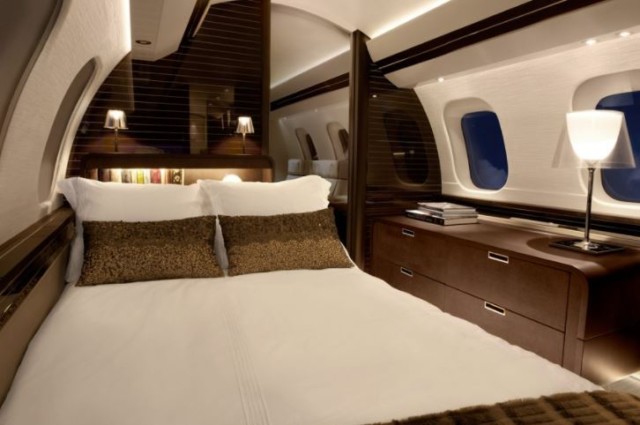 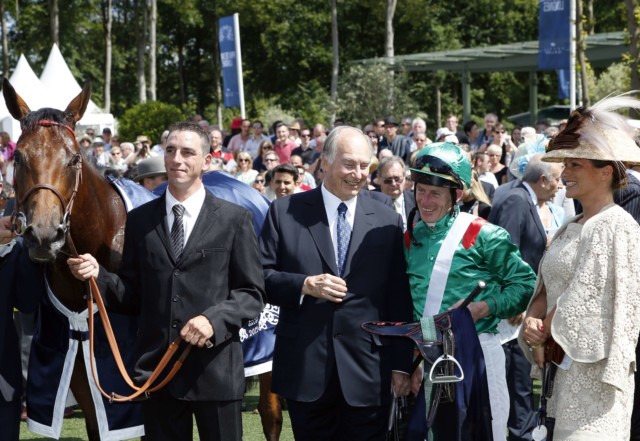 The Aga Khan, second from left, celebrates winning the Prix de Diane in 2012