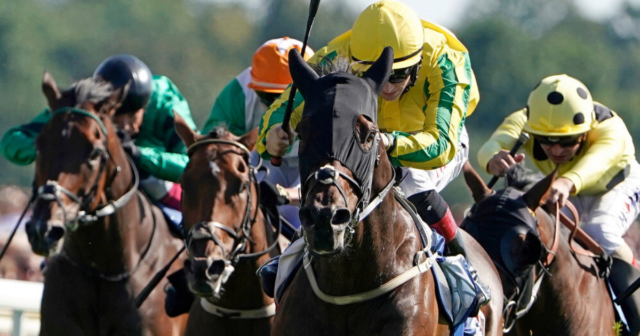 DAY ONE of the blockbuster York Ebor meet is here – and it looks like being an absolute cracker.

Picking a winner can be a bit tricky – but that’s why SunSport’s top tipster Steve Mullen – Templegate to you and me – has gone through every race with a microscope, picking out the best bets.

Day one of York is all set to be a cracker

WHENTHEDEALINSDONE and William Buick are a top team with the title-chasing jockey having won both times he’s been on board.

They came together for a smooth success at Goodwood last time when Roger Teal’s improving three-year-old had lots in hand despite a modest draw.

That was over the minimum trip but he finished well and should power to the line again.

Henry Candy knows what he’s doing with sprinters and his Twilight Calls looks a live danger.

He was sent off favourite behind the tip at the Glorious meeting but had to settle for fourth after getting knocked sideways coming out of the stalls.

He showed his class when scoring at Newmarket before that and looks capable of better.

Desert Safari has won just once on turf but went down in a head-bobber in the Shergar Cup at Ascot earlier this month.

He was in front yards after the line and will benefit from this slightly longer distance under James Doyle.

Hurricane Ivor hated the deep mud in the Stewards’ Cup and will be a different horse dropped in distance in better conditions.

Mountain Peak comes here on the back of a win. He could do with quicker ground but has a good strike-rate and a 4lb rise is fair.

Soul Seeker scored on his last run here and is better than we saw at Ripon last time.

EHRAZ was a big improver when scoring at Ascot last time.

He was a good second to Noble Truth on debut at Newmarket but stepped up to score by more than fourth lengths and it could have been a lot further.

Moving back to seven furlongs holds no fears and trainer Richard Hannon thinks a lot of him.

Dubawi Legend put on an impressive show at Doncaster when skittling his rivals over this distance on debut.

This is a clear hike in class but he travelled strongly and is capable of improving further for Hugo Palmer.

He ran around a bit in the closing stages and can’t afford to do that again for all his ability.

Andrew Balding continues in flying form and his Imperial Fighter didn’t have to hit top gear when striking on debut at Goodwood.

He enjoyed the soft ground there so some rain would be welcome.

Royal Patronage didn’t have a lot to beat at Epsom and must raise his game.

KEMARI was impressive winning the Group 2 Queen’s Vase at Royal Ascot on just his third start.

That was over 1m6f but he should have no speed issues over this trip and looks a top-class performer in the making.

Sir Lucan and Third Realm were second and third in the Gordon Stakes at Goodwood and can fight it out for the places.

The latter travelled well and may not have handled the track so has every chance of turning the form around on this fairer course.

It’s still early days for High Definition who looked classy as a two-year-old.

He was a fair third in the Dante here in May before flopping when favourite for the Irish Derby.

He’s the pick of Ryan Moore but needs to bounce back.

Yibir pulled hard at Goodwood but is a Group 3 winner who could hit the frame if settling better.

MISHRIFF ran a cracker in second behind Derby winner Adayar in the King George VI at Ascot.

He went toe to toe giving lumps of weight to the Classic star there before his stamina just failed in the closing stages.

Team Gosden’s star drops to his ideal distance and the younger horses aren’t so much better off at this stage of the campaign.

Love was just over a length behind the tip in that race and her 3lb fillies’ allowance will help again.

She won the Yorkshire Oaks here last season in her run of six Group 1 successes and looks the biggest danger.

Rain would massively boost the chances of Alcohol Free who has won her two Group 1 contests on soft ground.

She took the Coronation Stakes at Royal Ascot before a good run at Newmarket ahead of her success in Goodwood’s Sussex Stakes.

They were all over a mile but her racing style suggests she will stay.

Mohaafeth was just half a length off the pace when third in the Group 2 York Stakes last month.

He won four on the trot before that but was beaten fair and square by Juan Elcano and must improve to reverse that form and hit the frame.

Alenquer was a solid third in the Grand Prix De Paris but needs more.

PLATFORM NINETEEN travelled smoothly over 2m4f in hot company at Glorious Goodwood only for his stamina to fail in the closing stages.

He drops back in trip here and scored on his last visit to the Knavesmire. This is hard to call but he should be right there.

Scaramanga clocked a personal best on the level when winning at Newbury latest and Paul Nicholls’ runner looks a threat again despite a rise in the weights.

Elysian Flame is a consistent performer in these staying contests and he was just ahead of the tip at Goodwood.

He was asked to make up a lot of ground there and finished strongly. This shorter trip may not be ideal on that score.

Arcadian Sunrise went close on the level at the Galway Festival before scoring over hurdles later in the week.

He looks well handicapped and is right in the mix under Jamie Spencer.

TWEET TWEET flew away from her rivals at Haydock last time to win with plenty in hand.

She has plenty of zip and looks capable of another step forward.

Tenaya Canyon has been hiked a fair 5lb for winning a decent race at Doncaster and looks a big threat under Saffie Osborne. She stays well and will be strong at the finish.

Ey Up It’s Maggie is consistent and went close in a big field here before a fair effort in good company at Chester.

She goes on any ground and looks a solid each-way bet.

Stars In The Night wasn’t disgraced at Listed level before going down in a photo at Thirsk.

She’s climbing the weights but can’t be ruled out.

Mid Winster has held her own in better races here but needs her best form from 10lb higher than her last success.

BOSH grabbed the dosh when winning over course and distance in June before following up at Newbury.

He improved again when going close in a big sales race at Naas earlier this month.

That’s the best form on show and he’s the one to beat for Richard Hannon.

I’m A Gambler has really improved when winning his past two runs and deserves this hike in grade.

He battled well to strike at Catterick and can hit the frame at fair odds.

Mark Johnston also runs Jadhlaan who scored over 5f here in June and came back to form at Goodwood last time.

He has a chance off the same mark. Sisters In The Sky relished soft when winning over this trip and would come into it if the heavens open.

Flaming Rib got the job done at Thirsk over this trip. He needs more at this level but could deliver.

Aristobulus had almost four lengths in hand at Nottingham and is another with more to offer.