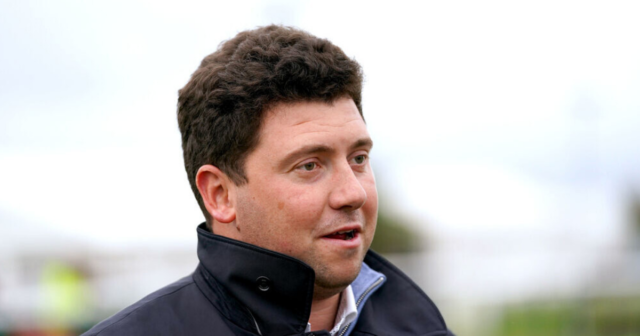 A WINNING racehorse owner has been fined £4,000 for calling top trainer Olly Murphy a ‘f***ing ****’ and giving the middle finger to punters.

Graham Jones was deemed to have broken rules on ‘violent or improper behaviour on a racecourse’ at Stratford in August 2019.

Jones, according to a judicial panel ruling, launched his tirade after his horse Oneofthesenights won a 2m6f chase, beating Murphy’s Beau Sancy in a two-runner contest worth £6,238 to the victor.

The owner did not attend a BHA hearing into his conduct held last month.

But the full written reasons for the independent panel’s ruling have now been released, revealing the shocking racecourse scenes some 12 observers claimed to have witnessed.

One of the incidents included Jones allegedly saying to Aidan Coleman, jockey on the runner-up, ‘that’s f***ing justice’ and ‘you need to get a better horse’.

The written findings, in full here, read: “Jones kept shouting ‘Murphy, Murphy’ which seemed to be attracting attention from the crowd.

“Mr Jones followed him so closely Mr Murphy could feel his spit land on the back of his neck as he ‘raged’ at him.

“Mr Murphy did not speak to him as he walked away.”

Derek Jackson, a former owner and friend of Murphy, said he saw an ‘aggressive’ Jones ‘fall off the end of the presentation podium’ as he went to collect the first-place prize.

The findings read: “Some of the crowd booed Mr Jones who reacted by sticking his middle finger up at the crowd and making the ‘w***er’ sign with his hand.”

Another witness, Robert Bellamy, said he saw Jones ‘have a go’ at the crowd.

The ruling read: “Mr Bellamy observed Mr Jones starting to ‘have a go’ at the crowd, saying something like, ‘you can shut the f*** up as well’.”

Jamie Snowden, trainer of Jones’ winning horse, said he was concerned two security guards in the winners’ enclosure were about to remove Jones before he could collect his prize.

Bellamy said he heard Jones say something along the lines of ‘I am not receiving any f***ing gift from this lot here’.

The written reasons added: “When Mr Jones did go up onto the podium, Mr Bellamy observed him stumble up the steps.

“Following the presentation, Mr Bellamy describes Mr Jones ‘lagging behind’ his group as they made their way to the winning owner’s room with the course director and saw him turn back to the crowd and make the ‘double w***er’ sign, with both hands up in the air.

“Mr Bellamy did not know why Mr Jones did this as he did not hear or see anything that would have caused that reaction.

“Mr Bellamy recalled that at some stage Mr Jones shouted to the crowd, something like, ‘you’re all w***ers’.

“He also remembered Mr Jones using the word ‘***’ at some point, but is unsure as to where and when, nor in what context this occurred, but recalled the specific word as he describes it as ‘foul’.

“In over 30 years of involvement with racing Mr Bellamy had never witnessed such behaviour from an owner.”

In direct communications and through his then solicitor, Jones claimed it was Murphy who ‘acted aggressively’.

The written reasons behind the ruling concluded: “Mr Jones had been given every encouragement to attend, to challenge and to cross examine witnesses, to present his own case and to take the opportunity of calling any of his own party if he wished. He chose not to do so.”

“The behaviour was unacceptable and cannot be tolerated.

“While taking some account of the delay, the decision of the Panel taking an overall view was that a substantial fine of £4,000 was appropriate.”

Did you miss our previous article…
https://www.sportingexcitement.com/horse-racing/jockey-praised-for-showing-balls-of-solid-rock-after-miraculous-recovery-leads-to-unbelievable-victory/