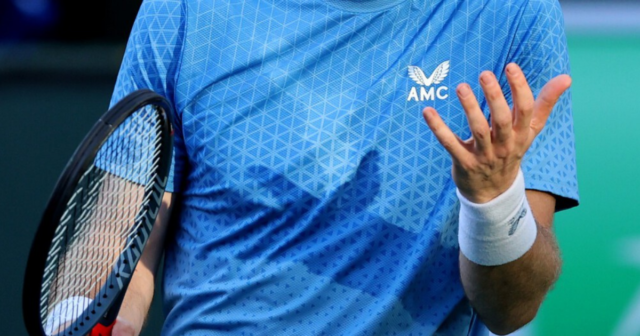 The British tennis legend lost 6-4, 7-6 in the third round of the BNP Paribas Open yesterday.

Andy Murray could not hide his frustration after his defeat to Alex ZverevHis rival beat him 6-4, 7-6 in the third round of the BNP Paribas Open

Murray was looking for his top five win since the end of 2016 as well as attempting to stop a man who had won 18 of his last 19 games, dating back to Vverev’s Tokyo Olympic Gold medal performance.

And despite the tournament providing plenty of encouraging signs regarding the physical terms of the 34-year-old, he was unable to find a way past his foe and the world No4.

And he vented his fury by angrily hurling his racket as the match ended in a 7-4 tiebreak and then posting the word ‘F***’ onto his social media account.

Murray had admitted beforehand there was little love lost between the pair, saying: “I wouldn’t say we’re best friends. I mean, we don’t really chat a whole lot.”

Still full of emotion after his setback, Murray said: “I’m not saying he played great either, but I don’t think I played well today. There were a lot of mistakes.

“There was some good stuff in there, but it was mixed in with bad. There was no consistency I don’t think.

“My average level was just not really there today. It was either good or bad. Yeah, I wouldn’t put that down as playing really well.

“The positive for me to take from it is I obviously had opportunities again. Yeah, I mean, I guess that’s positive. I didn’t feel like I played a great match and still had chances, so that’s positive.

“But, yeah, I’m disappointed because, I mean, I obviously want to be winning these matches. I haven’t in the last few months. Yeah, something needs to change.”