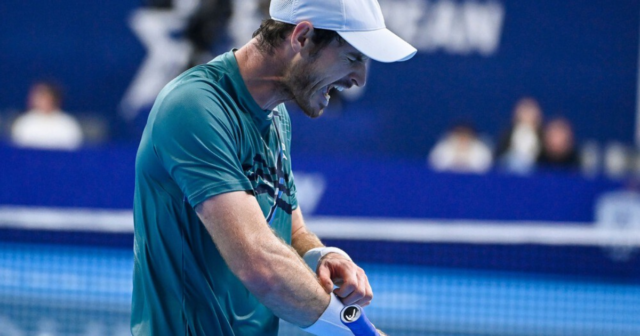 KNACKERED Andy Murray survived two match points in a rollercoaster clash at the scene of his greatest triumph since a hip op.

The tenacious Scot beat American Frances Tiafoe 7-6 6-7 7-6 after more than three-and-a-half hours in the first round of the European Open in Antwerp.

There was full respect between the two warriors and they shared a touching hug at the end.

It is a surprise Tiafoe, 23, survived as long as he did given he had lengthy medical treatment on his lower back after FIVE GAMES.

It was this hard-court indoor event that Muzza won two years ago, proving all the doubters wrong given he had had a metal hip implant just nine months earlier.

It is a result that will justify his wildcard and silence though that feel he has taken a spot from a newcomer.

The Argentine might be ranked number two in the draw but won’t hold many fears given he was crushed last week in Indian Wells by Cameron Norrie.

“It’s the longest three-set match I have played by quite some distance.

“I am tired right now. It was an unbelievable battle. He kept coming up with brilliant serves and shots when I was having chances.

“Nowadays my body is old now, I have played a lot of matches, I don’t mind playing long matches but that took it to another level. I will use my day off now to feel okay for Thursday.”