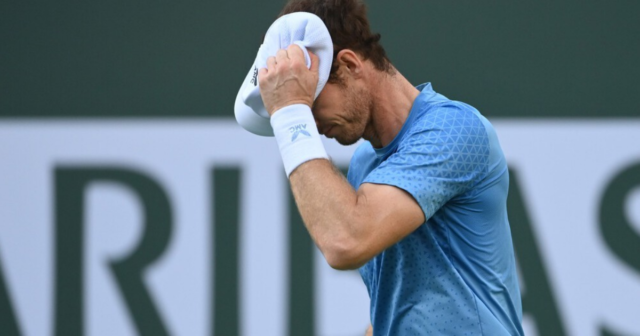 ANDY MURRAY is set to drop outside of the top 170 in the world rankings – despite his battling run at Indian Wells.

The Brit, 34, reached the third round at the Masters 1000 event in the Californian desert.

He battled back to beat Spanish teenager Carlos Alcarez before being edged out by world No5 Alexander Zverev.

But although he will pick up some points from that, he will lose the 250 he earned in October 2019 when he won the European Open in Antwerp.

That will see the three-time Grand Slam champ slide at least 50 places down from his current ranking of No121.

Murray’s victory in Belgium two years ago would ordinarily have dropped off a year ago – but the ATP made adjustments to the ranking system due to the pandemic.

On that run to the title, the former world No1 beat Ugo Humbert in the semi-finals and Stan Wawrinka in the final – coming from a set down in both matches.

That was his first tennis title since hip resurfacing surgery in January 2019.

And Murray is yet to win three matches at one ATP Tour-level tournament since as he continues to battle back to full strength amid other injury woes.
But the signs for Murray are encouraging.

He reached the third round at Wimbledon, pushed Stefanos Tsitsipas to five sets at the US Open and more than held his own against Zverev after defeating Alcarez in three hours.

It was an eventful tournament for Muzza at Indian Wells.

As well as throwing in an underarm serve during his win over the Spanish teenager, Murray had his ‘stinking’ tennis trainers and attached wedding ring stolen from under a car.

Thankfully, he was reunited with them and got himself back in the good books with wife Kim back home in the UK.

But Murray revealed he will skip this year’s Davis Cup – because he does not feel he deserves a spot in the team compared with the form of Dan Evans and Cam Norrie.

The Scot said: “I don’t feel right now I would be playing.

“Obviously that would be up to Leon [Smith], but I’m not sure I deserve to play in that team.

“Cam and Dan have had a great year. Liam Broady’s in and around the top 100 now and we’ve got very strong doubles as well.

Did you miss our previous article…
https://www.sportingexcitement.com/tennis/coaching-emma-raducanu-is-a-poisoned-chalice-people-will-not-be-in-a-rush-to-work-with-her-says-sharapovas-old-mentor